‘14-party not embarrassed at Menon’s remark’ 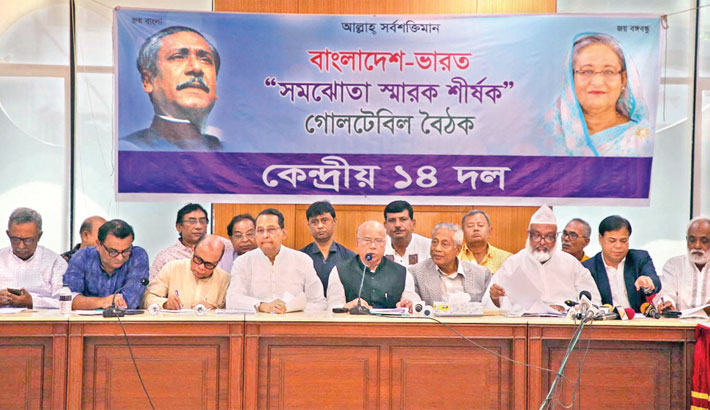 Mohammed Nasim, spokesperson of Awami League-led 14-party alliance, speaks to journalists after emerging from a roundtable discussion at Awami League central office on Bangabandhu Avenue in the capital on Tuesday. - SUN PHOTO

“Why would the 14-party be embarrassed over the remarks of a single person? The alliance has not been formed with individuals rather it has been formed with organisations. It is an ideological alliance based on spirit of the War of Liberation, communism, democratic values,” Mohammed Nasim, spokesperson of the 14-party alliance, said.

Nasim, also a presidium member of the Awami League, made the statement while addressing a round table discussion at Awami League central office on Bangabandhu Avenue in the capital on Tuesday.

Menon, president of the Workers Party of Bangladesh, recently alleged that people could not vote in the December 30 general elections.  Mentioning that alliance will not take responsibility of a person, Nasim also said that they would seek an explanation from Menon over his statement during a meeting of the alliance.

Replying to a question over Menon’s absence, Nasim said he does not know anything over it, but Workers Party general secretary is present on behalf of their party.

Mentioning that golden era prevails in the relation between Bangladesh and India, Nasim said vested quarter does not like this friendship.