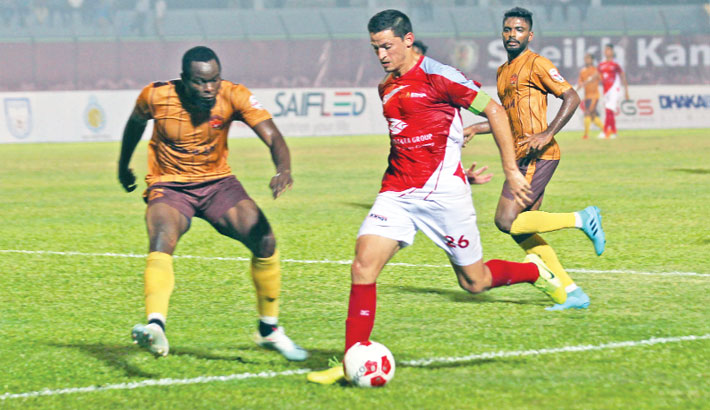 Bashundhara Kings were edged past by Gokulam Kerala Football Club by 1–3 goals during their Sheikh Kamal International Club Cup match at MA Aziz Stadium in Chattogram on Tuesday.

Bashundhara Kings fought hard but Gokulam took the early lead on the 24th minute of the match, courtesy of Henry Kisekka.

Bashundhara Kings went on the counter to equalise but it was not to be as Gokulam utilised sensational opportunity to double their lead on the 32nd minute as their forward Nathaniel Garcia scored a stunner.

Kisekka completed his brace right after the resumption of game and took the score line to 3-0.

Bashundhara Kings scored a consolation goal on the 74th minute of the match as Motin Miah sent in a crawler to the nets.

Earlier on the day, a superb hat-trick by Brazilian forward Bruno Suzuki Castanheira guided Terengganu FC of Malaysia to a 5-3 goal victory against Chennai City FC of India in the first Group B match.

In the goal-fest game, midfielder Rahmat Bin Makasuf opened the account for Terengganu FC by a right-footed low-range shot off a pass from Bruno Suzuki Castanheira in the very 5th minute (1-0).

But, Japanese midfielder Katsumi Yusa levelled the margin for Chennai City in the 24th minute as Terengganu captain-cum-midfielder Lee Tuck made a silly mistake in the danger zone (1-1).