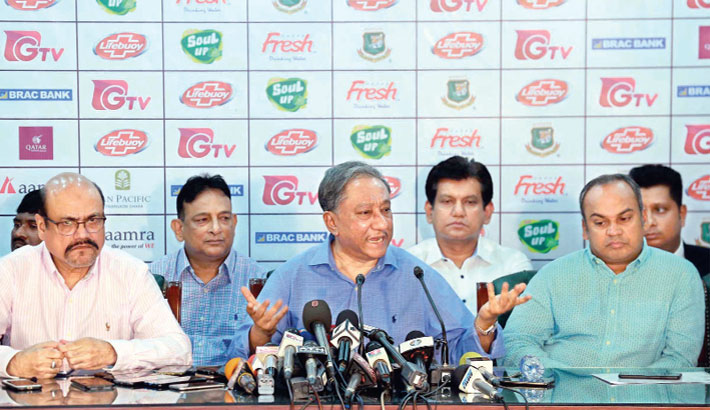 While the cricketers put forward an eleven-point demand and wanted those to be met in a bid to bring the back normalcy in country’s cricket, Bangladesh Cricket Board (BCB) President Nazmul Hassan Papon claimed that the board has already fulfilled most of the demands and the rest is in the process of being met.

Here is Papon’s response to all eleven demands raised by the players.

Papon’s response: BCB actually doesn’t recognise CWAB but due to the insistence of players, BCB last year recognised it. It should be remembered that players’ salaries were actually increased on the insistence of CWAB. If the players want to elect CWAB President, Secretary on their own, we have no issues with that.

Players’ demand 2: Dhaka Premier Division Cricket League (DPL) players’ transfer system has to return to the previous model and players should have the right to choose clubs.

Papon’s response: Just a month ago, I told CCDM (Cricket Committee of Dhaka Metropolis) Chairman to reinstate the traditional system of players transfer in DPL and it is due to be implemented in next season. The players know it well. The players-by-choice system was adopted to quell the discrimination because in the traditional players transfer, only the stay players earn a lot financially but most of the players couldn’t earn much. Since the players want the previous model, we don’t have any objection.

Players’ demand 3: After this year, Bangladesh Premier League (BPL) should return to the franchisee model. There should be no disparity between salaries of local players and international players. The players must be able to decide their pool.

Papon’s response: You all know BPL will be held without any franchisees just for this year. From next year it will be held the way it was previously held. It was made very clear, so why demand something which already exists. When it comes to salaries, it is completely up to the franchisees. The players know well that BCB has nothing to do with it.

Players demand 4: Match fee of the first-class cricketers should be increased to one lakh taka. Cricketers’ salaries must be increased by fifty percent.

Papon’s response: Match fee of first-class cricketers were increased every year despite no significant improvement in their performance. In case of national players’ salaries, it was increased to four lakh taka per month from two and a half lakh taka. Fifteen national cricketers got bonus worth fifteen crore taka. Did they reveal this amount to you? The general people could never imagine how much they earn from the BCB every year.

Players demand 5: Facilities like gym, indoor and ground must improve. Coaches, physios and trainers must be appointed throughout the year. The daily allowance of fifteen hundred taka, allocated for players by BCB is not adequate and the amount must be increased so that the players can ensure their fitness. The plane fares of the players must be ensured by BCB when the players travel for games.

Papon’s response: The daily allowance was earlier one thousand taka and we increased it to fifteen hundred taka. Gradually it will be increased. Every district has coaches and other facilities. I don’t think the players who raised the demands actually know this. Work is in progress to set up academies in every district. We are trying to increase the number of grounds and all those developments are in progress.

Players demand 6: The number of players who are handed national team central contracts must increase.

Papon’s response: We have more played under central contract than the other countries. Some countries even have just twelve centrally contracted players. Central contract depends on the players’ performance.

Papon’s response: They (boycotters) probably don’t know that just one year ago, salary of the local staffs has been increased.

Papon’s response: Yes, we will introduce some more tournaments. But first tell them (cricketers) to play those tournaments, tell them to manage time from the tight international schedule and to take part in it.

Players demand 9: There must be a fixed cricketing calendar before the start of the domestic league.

Players demand 10: Due salaries of DPL must be paid on time.

Papon’s response: BCB has taken the responsibility to pay the due salaries of the players if the clubs failed to pay it. BCB has already cleared some of the dues. BCB first tries to force the club to pay it on time. If BCB starts paying the players, the clubs will take advantage of the programme and won’t pay all-together.

Players demand 11: The rule that a player cannot play more than two franchise-based tournaments in a year must be overturned.

Papon’s response: Who will take the responsibility if the player gets injured due to overwork and what is shocking that this demand came from a player who never played in any overseas tournament.