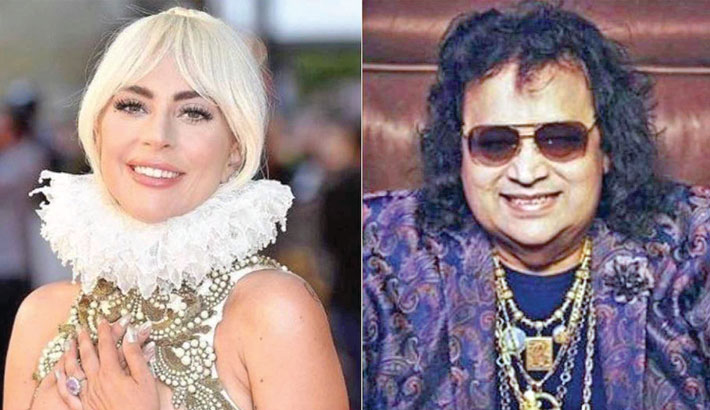 Bollywood music composer Bappi Lahiri, as famous for the disco beats in his songs from the 1980s as his numerous gold chains, has revealed that he has recorded two songs with American singer Lady Gaga. He expects the songs to be released by the year-end, reports Mumbai Mirror.

The composer said that in the songs while he is singing in Hindi, Lady Gaga joins him in English. The report quoted him as saying, “Yes, two duets, with her singing in English and me in Hindi in my inimitable style. We are now waiting for the release to be greenlit, hopefully by the year-end. I also collaborated with Akon two month ago. That song should also be out soon.”

The report also adds that Bappi’s older songs are a huge hit with other artists too. Welsh DJ and producer Jamie Jones (better known for his work in genres such as House, Deep House, Tech House,Techno) and New York-based DJ duo The Martinez Brothers have come together for a two-track production called Bappi. Speaking about it, Bappi was quoted in the report as saying, “It features a remix of my superhit sog from Disco Dancer ‘Jimmy Jimmy Jimmy’. The British-Sri Lankan rapper M.I.A used the same song in her 2007 album Kala and, a year later, it was also there in the climax scene of Adam Sandler-film, You Don’t Mess With The Zohan.”

On Sunday, Lady Gaga tweeted a Sanskrit shloka, much to the delight of her many Indian fans. She wrote: “Lokah Samastah Sukhino Bhavantu.” The mantra encompasses the feeling of love and happiness towards the world. In simple words, it translates to ‘May all beings everywhere be free and happy’. The singer is recuperating from a nasty fall she suffered during a concert in Las Vegas.

Gaga’s tweet has since gone viral. While some users questioned if it has something to do with her next album, others sent her good wishes for a fast recovery. “Just beautiful,” one user wrote, while another posted: “Continue to heal mom”. “Great to see Lady Gaga tweet Sanskrit Mantra which radiates the feeling of love and happiness towards the world,” one user wrote.