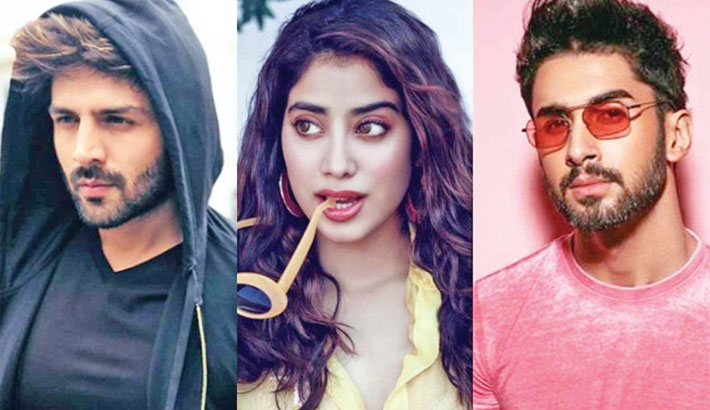 Actors Janhvi Kapoor, Kartik Aaryan and newcomer Lakshya, have begun their prep for their upcoming film, Dostana 2 in real earnest. According to a report in Times of India, the trio visited the office of Karan Johar and had fun.

A picture from the session was shared by director Collin D’Cunha as his Instagram stories. In one of them, Kartik can be seen trying to fix something on Lakshya’s shirt (who is lying on his back in front of them) while Janhvi is all worked up as she looks at Kartik. They are all casually dressed — Kartik in a white t-shirt, Janhvi in a pale blue shirt and Lakshya is in black casuals.

Dostana 2 is the sequel to 2008’s hit film Dostana, starring Priyanka Chopra, Abhishek Bachchan and John Abraham. The film was directed by Tarun Mansukhani and produced by Karan Johar, the latter is producing this one too.

In June this year, Karan had announced that Kartik and Janhvi would star in Dostana 2. He had written: “The return of the franchise with unlimited madness! @TheAaryanKartik, #Janhvi & a soon to be launched fresh face - making it the trio for #Dostana2, directed by @CollinDcunha. Watch out for the third suitable [email protected] @dharmamovies.”

In September this year, Karan announced that TV star Lakshya would play the third lead in the film. Sharing pictures of the new find, Karan had written: “Both happy and excited to introduce the new kid on the Dharma block! Lakshya will be making his debut with us in #DOSTANA2 and from thereon, we hope to start a solid cinematic journey together! Please welcome #Lakshya and shower him with all your love and blessings...” No sooner did he share it, social media was abuzz with mentions that this could be another instance of nepotism.

Karan responded with another tweet to clear the air. He wrote: “Yes I woke up to several inquiries asking about his film industry connections! He is not from the business and went through a legit audition process! I am grateful to Shanoo Sharma for introducing Lakshya to @DharmaMovies.”