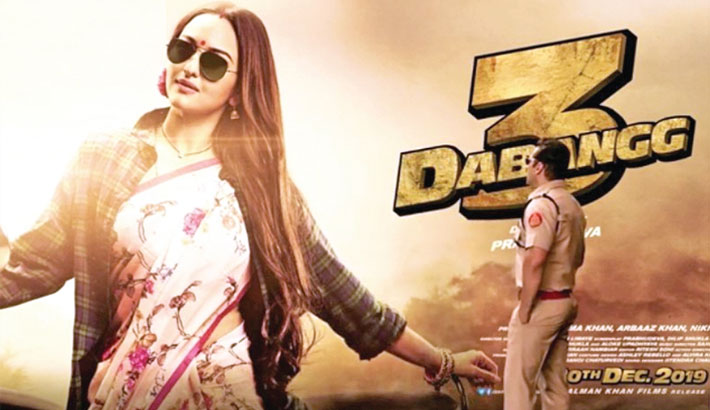 Salman Khan, aka Chulbul Pandey, has shared the poster of the love of his life, Mrs Chulbul Pandey, aka Rajjo, played by the effervescent Sonakshi Sinha. Salman Khan took to twitter on Monday and shared Rajjo’s look with a fun poster, report agencies.

In the caption of the Twitter post, Salman reminds his fans and followers of Dabangg 3's trailer release on October 23. In the new still, Sonakshi poses on a motorcycle and sports Chulbul's signature sunglasses. She wears a shirt over a floral pink saree and has a flower pinned to her hair.

Salman refers to his wife as his Habibi in the video. Sonakshi’s character has evolved over the course of the films and the chemistry between Chulbul and Rajjo is quite interesting to watch.

Before Sonakshi Sinha’s poster for the film, Salman had shared a video of himself as the first look of Dabangg 3. The video also had Kiccha Sudeepa who is set to play the antagonist in the film.

Ever since the announcement happened, Dabangg 3 has created a lot of buzz around the film as Dabangg 3 is one of the most awaited films of the year, and the audience is eager for the return of their beloved cop Chulbul Robinhood Pandey onscreen.

Sonakshi has been a part of the Dabangg franchise since its first release in 2010 as Chulbul Pandey’s (Salman Khan) love interest and then his wife. Directed by Prabhu Deva, Dabangg 3 is produced by Salman Khan Films and Arbaaz Khan Production. It is scheduled to release on December 20.