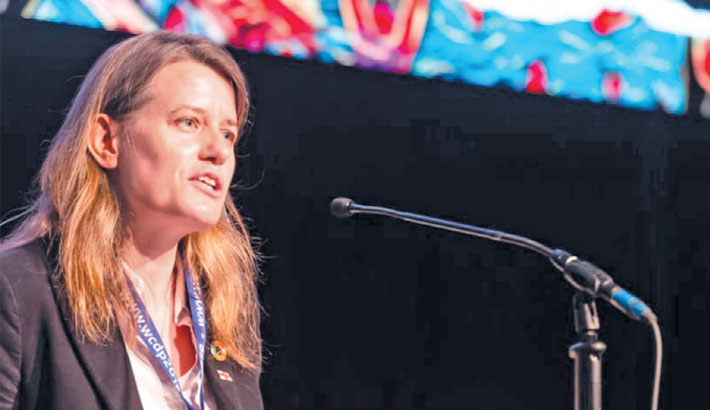 Gemma May, the international advocacy manager from the Royal National Lifeboat Institution (RNLI) in UK called on delegates attending the World Conference on Drowning Prevention 2019 in Durban to support a push for the first United Nations' declaration on drowning.

Public health experts and activists from across the globe attending the World Conference on Drowning Prevention 2019 at Durban, South Africa called for a UN resolution on drowning prevention. WHO data shows that every year 360,000 people die from drowning globally, which is the 3rd leading cause of accidental deaths. Approximately, 1,000 fatal drowning takes place every day i.e. 41 deaths per hour and 2 deaths in every 3 seconds. WHO statistics also show that drowning causes death of at least 12,000 children per year, which is equivalent to 43 per cent of all child deaths and higher than the death rates from maternal mortality and malnutrition. Drowning mortality is the highest among children aged 1- 4 years while more than 50 per cent of drowning deaths occur before 3rth birthday globally. Low and middle-income countries, where the drowning rate is 3 times higher than the high-income countries, are the most affected compared to rich countries. Despite the cruel facts, in the history of the United Nations drowning is yet to be mentioned in any resolution. Although, the UN has set targets of reducing all preventable deaths by 2030 but drowning has not been mentioned, while without addressing the epidemic of drowning such target is impossible to achieve.

Under such circumstances, the world conference on drowning held this year where 540 delegates from 65 countries covering all the continents attended the 3-day long events. The global participants discussed multiple factors triggering drowning deaths such as insufficient or lack of physical barriers between people and water, particularly close to home; lack of (or inadequate) supervision of young children; uncovered or unprotected water supplies and lack of safe water crossings; lack of water safety awareness and risky behaviour around water such as swimming alone; travelling on water, especially on overcrowded or poorly maintained mal-standard ferries; flood disasters, whether from extreme rainfall, storm surges, tsunamis or cyclones. Participants from across the continents shared that communities, government and non-government actors at large are not aware of the harshness of drowning while building awareness among the critical mass is essential but not sufficient.

Though preventable through human intervention, evidence shows that drowning is a leading cause of death worldwide, particularly in low-and-middle-income countries where 91 per cent of fatal drowning occurs. Experts from continents gathered in the conference shared a wide range of interventions, which have been evidentially found as effective means to prevent drowning in the rural context and diverse geography across the globe to reduce child drowning. Proven in Bangladesh context, interventions such as strategic use of barriers to control access to water, creation of safe places such as day care centres for pre-school children, and teaching school-age children basic swimming skills have been found effective in other parts of the globe and replicable to diverse context and geography. In addition to these three tested interventions, there must have an effective mechanism to flood risk management; strict enforcement of inland water transport legislations followed by enactment and adoption of water safety policies. To establish a preventive safety net, it requires capacitating communities as the first responder and ensuring that communities as a whole reject all harmful traditional practices. These three interventions have already been recognised by the global audience and practitioners as the best practice for reducing the rate drowning deaths.

In many low-income countries like Bangladesh, childhood drowning tends to occur during guardians' busy hours, when they are doing household work or other daily tasks. Centre for Injury Prevention and Research (CIPRB) has developed Community Crèche named Anchal – the community-based institutional supervision of children during the hours when they are mostly exposed to the risk of drowning. Socially and culturally accepted, Anchal has now been found as a cost-effective useful intervention to protect children aged 1-4 years from drowning. Anchal, designed and adapted to function in the realities of rural geographical context, has been broadly steered by the community-based approaches in which parents played the key role while the community as supportive or facilitator. By now, many non-government actors in different parts of the globe have been providing day care services to several thousand children while it requires reaching additional millions of children where government intervention is a must for scale-up. Other measures of reducing drowning, such as installing barriers limiting access to water hazards reduces exposure and drowning risk of children aged 1-4 years old. Sound though simple, precaution should be taken considering the ground realities free from the risk of injury in a sustainable manner. Installation of barriers includes covering wells and cisterns; using doorway barriers and playpens; fencing swimming pools. Legislative measures having provisions for building codes might enable the sustainability of the drowning prevention interventions applicable to urban settings.

In Bangladesh, CIPRB has developed a frugal structure for teaching swimming techniques available at the rural setting where children aged 5-11 years are trained following a structured curriculum and adequate safety measures. Studies show that teaching children basic swimming, water safety, and safe rescue skills help to reduce the rate of drowning. In rural settings, the bamboo platform while in the urban setting portable plastic pool has been found effective and cost-effective for training the children where the community based trained instructor does facilitate the sessions. Such installations are low cost and provide safe areas where children can be actively supervised while they learn which can be replicated in other low and middle-income countries.

In the global context, scaling up the tested interventions of drowning prevention though frugal is a great concern – in particular, wide-scale implementation of Community Crèche seems to end when external singular donor funding runs out. Integration of drowning prevention interventions with the Sustainable Development Goals (SDGs) and other global commitments relating to the wellbeing of children and recognising country-specific activities such as – the inclusion of water safety in education curricula or child welfare activities is the key to ensure the process for scalability and sustainability. It is evident that to achieve the number of global goals it is imperative to scale up the drowning prevention interventions.

Delegates attending the conference urged the global development and political leaders to engage and uphold the discussion of finding an affordable solution to reduce the drowning epidemic without which the majority of the targets of SDGs relating child mortality cannot be achieved. More specifically the conference this year embrace the urgency of drawing a UN resolution on drowning prevention that is essential to bring in the member states into accountability framework so that they adopt policies and allocate resources at the national level for supporting

Given the current scope of WHO, drowning has been regarded as the non-communicable disease control segment. But if the drowning prevention interventions are thoroughly reviewed, it would be evident that most of the interventions do not fall under the jurisdiction or scope of the department of health of different country settings, which creates the problem at the country level. For example in Bangladesh, developing the day care centres, teaching swimming, conduction of school awareness do not fall under the jurisdiction of the Ministry of Health. Now along with the adoption of UN resolution, the multiple actors should be made accountable to deal with the adversity of drowning.

Issues around mobilising resources to support interventions of drowning prevention should be discussed in the highest global policy for a leading to developing a multi-stakeholder coordination mechanism to mobilise and accumulating resources. Frugal innovation as Anchal - designed to save children from drowning having unique features and opportunities for promoting stimulations for early childhood development across the global context should be dealt through multifaceted efforts. Such opportunities need to be linked with all concerned multilateral agencies like UNDP, UNICEF, government agencies having special mandate to maintain welfare and ensure education for children. More importantly, such interventions have created scope for women's social and economic empowerment through their involvement in running the daycares facilities, transferring lifesaving skills of swimming. So, to scaling up the frugal innovations nationally and globally where resource mobilisation has been the dire consideration, it is urgent to bring those under revenue scheme with proper legislative and policy guidance. Most importantly, UN member states should come forwards setting up a multi-stakeholder coordination mechanism to tackle the drowning deaths having specially focused on:

the adversity of drowning;

mechanism for gathering and sharing data.

The writer is a policy activist and can be reached at: [email protected]