Colindres hopes to catch ‘em all 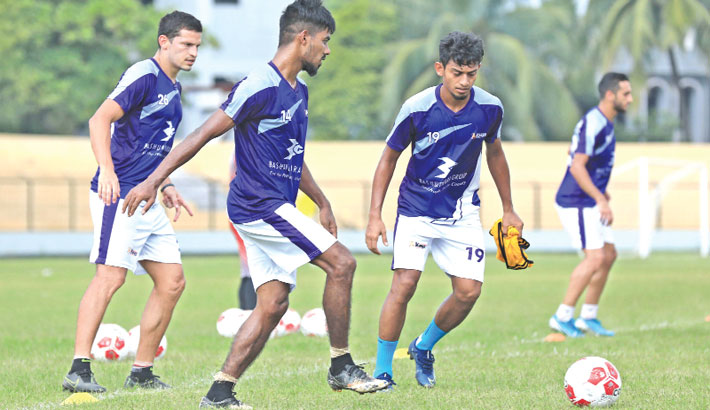 Bashundhara Kings ace forward Daniel Colindres, left, along with other booters take part in a drill during a practice session in Chattogram on Monday. — Rabin chowdhury

Bashundhara Kings world-cupper Daniel Colindres hoped to carry on his brilliant run for Bashundhara Kings and hope to conquer all that comes their way starting with Sheikh Kamal International Club Cup and eventually AFC Cup.

During their practice session at Bandar Stadium in Chattogram, Daniel Colindres also stressed on the fact that hard will still be the key if they hope to put on a brilliant show in Sheikh Kamal Cup.

“We want to win all the trophies namely Federation Cup, Independence Cup, Bangladesh Premier League and also the AFC Cup. So we need to do all our best to compete in all the tournaments,” said Daniel.

“I think not only me. The whole team is doing very well. We won some tournaments. So all we need to do is improve our team for the big competitions. We want to be competitive and fight it out in all the tournaments,” added Daniel.

Colindres believes that Sheikh Kamal Cup can be a platform for Kings’ new recruits to get a hold of the team ethos and the players to understand each other very well while preparing themselves for the upcoming tournaments. Nonetheless, Colindres is taking the tournament very seriously and is confident to clinch yet another title.

“Yes, we are confident. We are the BPL Champions. We need to play well in this tournament also. We will try to compete in Sheikh Kamal Cup and we will give our best to win,”

Bashundhara Kings brought in amazing local talents this season. Yeasin Khan, Robiul Hasan, Topu Barman and Shuhsanto Tripura will now feature for Bashundhara Kings. With further enhancement of strength, they are hoping to perform well in the upcoming tournaments by the taking this cup matches for as a preparation.

“We are glad to play in the Sheikh Kamal Cup. We will try to put on a good performance in the tournament so we are working very hard. Now, we have many national players in our ranks. We are getting to know each other and we want to have good game,” told Colindres.

“We have some new players who are very skilled. So, we need to sweat it out in the field to make sure we are ready for any challenge thrown at our way. We should create a very good team combination for the season,” said Colindres.

“It’s (Sheikh Kamal Cup) a pre-season tournament for us. It’s a friendly international club cup. We will play against foreign teams. So, we want to prepare for Federation Cup, Independence Cup, the League and also the AFC Cup,” said Daniel.

“We don’t just want to compete, we want to win. So we need to go step by step. We need to be serious about our business and take it step by step,” told Colindres.

Bashundhara Kings will face Chennai City FC in their group-stage along with Gokulam Kerala and Terengganu. Colindres acknowledged the strength of I-League 2018-2019 season Champions Chennai City.

“They (Chennai) are strong. They were at second (first) position in the last league. They are strong and have very good foreign players. We need to keep an eye out for them,” told Colindres.