Books on Bangabandhu,Sheikh Hasina in Russian language handed to PM 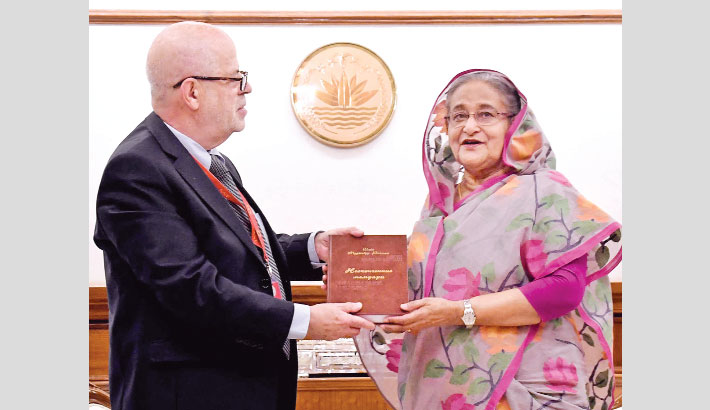 Prime Minister Sheikh Hasina receives copies of the books ‘Sheikh Mujibur Rahman and Birth of Bangladesh‘ and ‘The Unfinished Memoirs of Bangabandhu‘, translated into Russian language, from Russian Academy of Sciences Professor Dr V Naumkin at her office in the capital on Sunday. – PID PHOTO

The books are: “Sheikh Mujibur Rahman and Birth of Bangladesh”, “Unfinished Memoirs of Bangabandhu” and “Conversation of Professor Dr V Naumkin with Sheikh Hasina”.

Translator and publisher of the books Dr V Naumkin, a professor of the Institute of Oriental Studies under the Russian Academy of Sciences, handed over copies of the books to the prime minister at her office here this morning.

The press secretary said Professor Naumkin informed the prime minister that steps will be taken to widely circulate the book “Unfinished Memoirs of Bangabandhu” ahead of the birth centenary of the Father of the Nation next year.

The Russian professor said Bangladesh witnessed impressive development under the dynamic leadership of Prime Minister Sheikh Hasina over the last one decade.

Dr Naumkin said Russia and Bangladesh have been maintaining excellent bilateral ties since Bangladesh’s independence in 1971.

“Russia is also extending support to the development of Bangladesh’s various sectors since that time,” he said.

Referring to the nuclear power plant being set up in Bangladesh with Russian cooperation, Dr Naumkin said Moscow is imparting necessary training to Bangladeshi engineers and others in this regard.

Sheikh Hasina extended her sincere thanks to the Professor of the Institute of Oriental Studies for taking steps to translate and publish the books in Russian language.

The prime minister recalled with gratitude the support of the Russian government and the people during the War of Liberation in 1971 as well as their cooperation for rebuilding the war-ravaged country, including clearing mines from the Chattogram Port.

In this regard, she mentioned that many personnel of the Russian Navy made supreme sacrifice while clearing mines in the port. Sheikh Hasina said the people of Bangladesh hold admiration for the Russian people, especially for their support in post-war reconstruction, Chattogram Port demining and installation of power generation units across the country.

About Bangladesh’s development, the prime minister said the Father of the Nation dreamt of developing the country from the grassroots level.

“To materialise Bangabandhu’s dream, we’re implementing many programmes and I did home work for this when I was in jail,” she said.