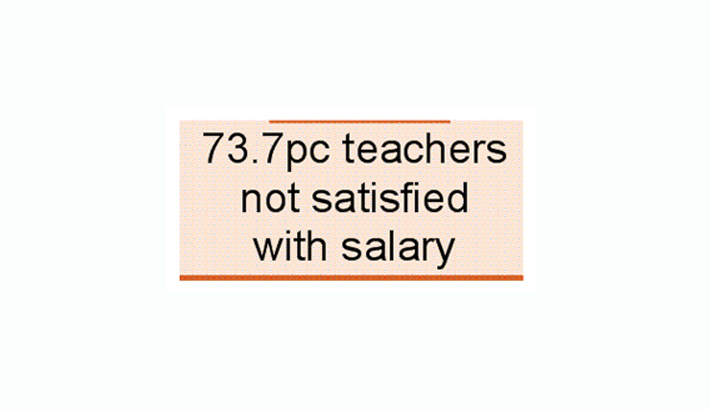 Secondary schoolteachers are largely unhappy with their paychecks due to discrimination in the wages and other benefits for teachers working at MPO, non-MPO and government educational institutions.

The discrimination came to light in the education watch report-2018-19 prepared by Campaign for Popular Education (CAMPE). The report analyzed the salary structures of secondary level teachers at the government, MPO and non-MPO institutions.

The government schoolteachers were the top earners. Their annual income was 1.9 times as much as the grant (MPO) and 3.8 times the non-grant (non-MPO) teachers of the other institutions.

Considering the past year’s income and expenditure from all sources, 5% of the teachers rated their households as always in deficit, 20.2% as sometimes in deficit, 34.9% as breakeven, and 40% as surplus.

Although the government schoolteachers are getting more salary compared to those in private institutes, the pressure of class of private schools is higher than that for the teachers of government schools.

Talking to the correspondent, Bangladesh Teachers Association President Nazrul Islam Rony said: “I think the salary discrimination should be removed from the educational institutes to improve the quality of education.”

He said: “We are the teachers of MPO-listed institutes. We teach the same syllabus as like the government schools. But there is a huge gap between the salary structure of government and MPO-listed teachers.”

He said: “We are getting only Tk1,000 as house rent monthly but renting house is impossible by this Tk1,000.”

Rony urged the government for nationalization of the educational institutions to solve the problem.

Teaching was the only profession of 57.8% of the government and a third of the teachers in other institutions.

It was also mentioned in the education watch report that a serious attempt should be made to reduce the gaps with regard to teachers’ educational qualifications, and availability of infrastructure and other facilities in the institutions with a view to addressing the widening inequality within and among various types of educational institutions.

This should include a similar recruitment procedure including equity in financial and other benefits during job and after retirement. As the existing natural selection process has widened inequity over time, an intervention from the government is the order of the time.

Speaking at the report launching ceremony, Deputy Minister for Education Mohibul Hassan Chowdhoury said the report was an objective assessment of secondary education in the country.

Seeking cooperation from all, He also said the government is now working to improve the quality of education.