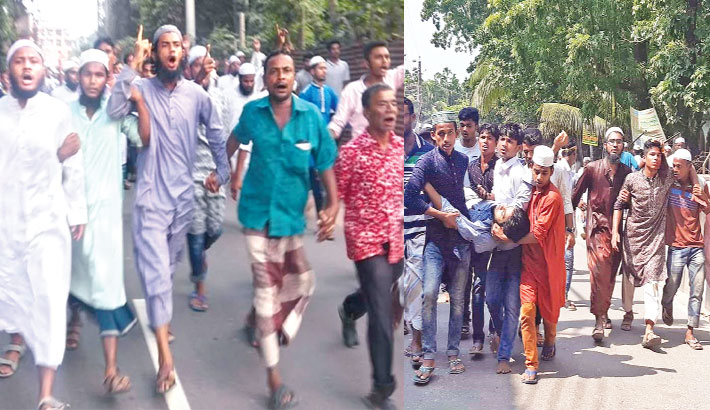 Protesters bring out a procession in Borhanuddin upazila of Bhola on Sunday in protest against a Facebook status that hurts religious sentiments of Muslims. A person injured in a clash with police is being taken to hospital (right). —star mail

At least four people were killed and 100 more injured, on Sunday many with bullet wounds, in fierce clashes between police and residents of Borhganuddin Upazila in Bhola district over a motivated Facebook status which allegedly appeared to have hurt religious sentiments of Muslims.

All the four died of bullet wounds, while nine other bullet-hit people were being treated at the Borishal Medical College Hospital.

Locals and police sources said, a message vilifying Allah and Mohammad (SM) was sent to several Facebook friends by messenger from one villager Biplab Chandra’s Facebook ID, who claimed his account was hacked.

“Additional law enforcers were sent to the spot after the unexpected incident took place. We will carry out an inquiry and take steps afterwards,” Deputy Inspector General of Borishal Range Police Shafiqul Islam told the reporters.

Four platoons of Border Guards Bangladesh (BGB) have been deployed to restore calm in the area, said spokesman of the elite crime fighters, Shariful Islam.

Of the deceased, three were identified as Mahfuz Patwari, Shaheen and Mahbub Patwari

Besides, many others were given first aid in local hospitals and clinics.

According to witnesses, the clash ensued around 11:30am when a group of people brought out a procession in Borhanuddin Bazar protesting a Facebook post of a Hindu youth, which they alleged had hurt the religious sentiments of Muslims.

The violence erupted when a large number the upazila tried to stage a protest rally for which they had no permission and at one stage, the protesters became violent, prompting the law-enforcers to go into action.

The angry mob hurled brickbats at the police, while police in riot-gear swung into action firing tear gas shells and rubber bullets.

Seemingly designed to hurt religious sentiments, the conversation went viral through social media in the locality since October 18, and the person in the centre of the storm himself went to the Borhanuddin Police Station in the afternoon on the day and filed a general diary stating that his Facebook ID might have been hacked.

The Bhola SP Sorkar Md Kaiser said that they have already detained three persons who were allegedly involved with Facebook hacking. “We have got all the information relating to the Facebook hacking,” the SP added.

Borhanuddin's Upazila Chairman Abul Kalam said he was on his way to the attend meeting around 10:45 am when he saw locals hurling brickbats at law enforcers.

The programme was originally scheduled to start at 11am but people hoping to join the event became enraged when the organisers wrapped up the meeting at 10am, said the upazila chairman.