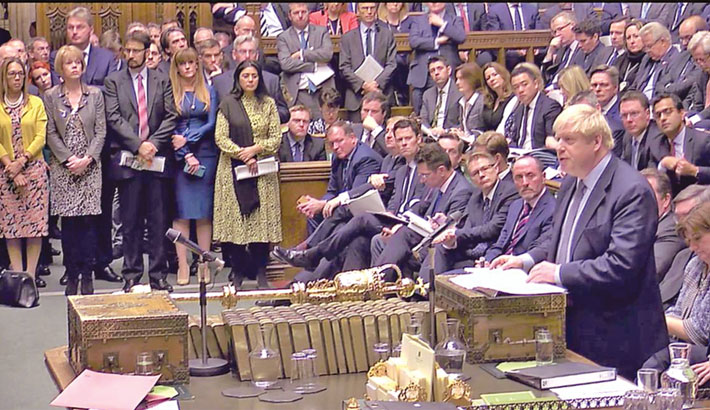 Britain’s Prime Minister Boris Johnson speaks at the House of Commons as parliament discusses Brexit, sitting on a Saturday for the first time since the 1982 Falklands War, in London, Britain, on Saturday. – REUTERS PHOTO

Lawmakers backed an amendment which effectively forces Johnson to ask Brussels for an extension until January next year, while they scrutinised the proposed domestic legislation to enforce the deal.

Johnson was defiant in responding to the result, despite conceding that the so-called “meaningful vote” on his divorce agreement with Brussels “has been voided of meaning”.

But he added: “The best thing for the UK and for the whole of Europe is for us to leave with this new deal on October 31.” “I will not negotiate a delay with the EU, and neither does the law compel me to do so,” he said.

Johnson earlier argued that further delay—more than three years after the landmark 2016 referendum to leave the bloc—would be “pointless, expensive and deeply corrosive”.

MPs could still meet the October 31 deadline when the government introduces its formal withdrawal agreement bill in parliament next week.

In opting to back a delay, they are seeking to ensure they do not run out of time debating it and deliver by accident the no-deal Brexit they oppose.

Separate legislation passed last month requires Johnson to write to the EU requesting an extension if a deal has not been passed by October 19. Johnson has said he would rather be “dead in a ditch” than ask for more time, but has also promised to obey the law.

Meanwhile, tens of thousands of pro-EU protesters from across Britain wielding banners, placards and flags converged on parliament on Saturday, as MPs debated the government’s Brexit deal.

Beneath largely clear blue skies, demonstrators rallied near Hyde Park in central London before marching to Westminster to call for a second referendum on Britain’s planned EU departure.

Walking behind a pink banner proclaiming “together for the final say”, they chanted: “What do we want? People’s vote! When do we want it? Now.” “The first referendum was jumping on a train without a destination,” said Douglas Hill, 35, from Oxford, south central England, with his Estonian wife and their baby daughter.

“Now that we have a destination, we need to have a second referendum.”  Another attendee, Theodor Howe, a 20-year-old student in Dundee, eastern Scotland, conceded another poll could be divisive but insisted it was still necessary.

“People should have a say in what is going to happen,” he told AFP, expressing hope that MPs reject Johnson’s deal and that he is forced to ask Brussels for another delay.

The British parliament may end up forcing Prime Minister Boris Johnson to request another Brexit delay on Saturday and give only provisional support to his divorce deal with the EU.

An amendment penned by former government minister Oliver Letwin would have the effect of forcing Johnson to write a letter to Brussels requesting an extension of the Brexit deadline until January 31 of next year.

On September 9 Queen Elizabeth II gives her approval to a law that would force the government to delay Brexit if it is not able to strike a divorce deal with Brussels.

On October 2 Johnson publishes his “final” Brexit proposals, which are rejected by the EU.

On October 10 he and his Irish counterpart Leo Varadkar say they see a “pathway” to a deal after talks over the main sticking point — how to keep open the border between the British province of Northern Ireland and the Irish Republic, a member of the EU.