Lady Gaga falls off stage while dancing with fan 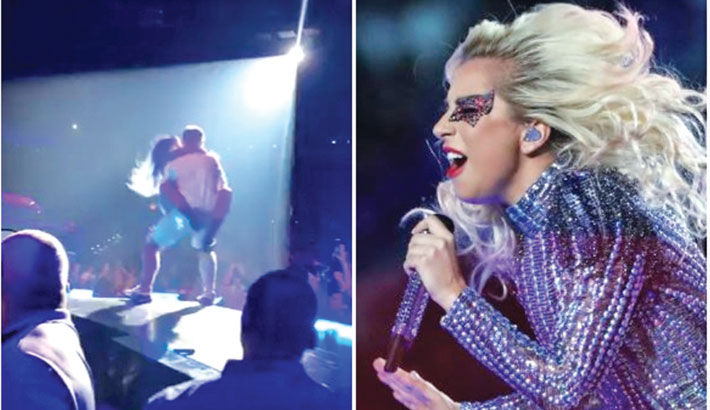 It was not a “perfect illusion” when Lady Gaga fell off the stage during her Las Vegas residency, “Enigma,” on Thursday night. The mishap occurred after the star invited a fan on stage with her, according to Entertainment Tonight.

Video from an audience member shows a man holding Gaga on stage, jumping up and down with her in his arms. Gaga’s legs were wrapped around the fan, so when he fell, she took the tumble with him, report agencies.

After losing his footing, the two plunged off the stage and onto the ground below. People immediately swarmed Gaga and the fan, helping them off the ground.

The singer did not appear seriously injured by the incident. Another video taken by an audience member shows her performing “Bad Romance” shortly after the fall. “The level of professionalism... far too much!” the fan wrote.

While the show went on, Gaga did ice her entire body after the concert – something that she called her “post show routine.” She shared three photos of the ritual: “ice bath for 5-10 min, hot bath for 20, then compression suit packed with ice packs for 20.”

She also shared her “pre-show” routine: swimming laps in a pool. On Instagram, she dubbed herself “Gaga Phelps.”

The Oscar-nominated actress has been known to deal with fibromyalgia, a condition that causes chronic pain. She has tried several treatments to ease the soreness in the past, as seen in her documentary, “Lady Gaga: Five Foot Two.”

The cause of fibromyalgia is unknown, but doctors have identified a number of risk factors, which usually occur during middle age. Ahead of the documentary’s 2017 release, Gaga said she wished to “raise awareness & connect people who have it.”

Entertainment Tonight has reached out to Gaga’s representatives and Park MGM for comment. There is no official word on whether or not she sustained any significant injuries during her fall.