‘Stop charging extra in the name of seating service’ 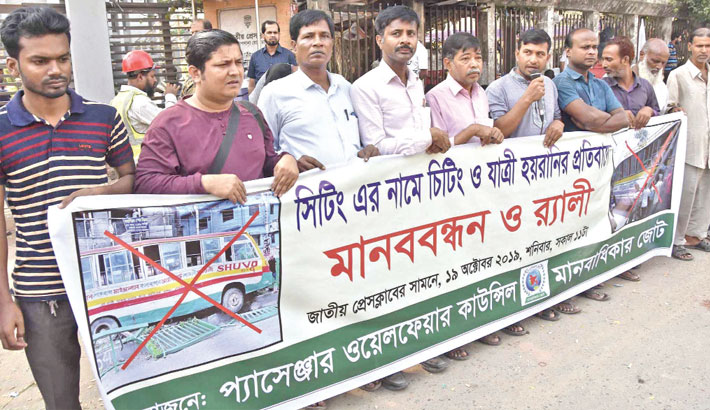 Manobadhikar Jote, a welfare organisation, forms a human chain in front of the National Press Club in the capital on Saturday demanding steps to stop charging bus passengers extra fare in the name of ‘seating service’. —SUN photo

Speakers at a programme on Saturday urged the government to stop charging bus passengers extra fare in the name of ‘seating service’.

They accused bus owners of fleecing passengers on the pretext of providing better services.

They were addressing a human chain organised by Manobadhikar Jote in front of National Press Club in the city.

Speaking on the occasion, Passengers Welfare Council’s convener Mohammad Mostafa said extra fare is taken under the pretext of ‘seating service’ where the number of passengers does not exceed the number of seats on buses.

He accused drivers of picking up and dropping off passengers anywhere they want.

The participants also called upon the government to take initiatives to bring discipline in the public transport sector.

They alleged that buses are driven by unskilled drivers while non-roadworthy vehicles continue to ply around the city.