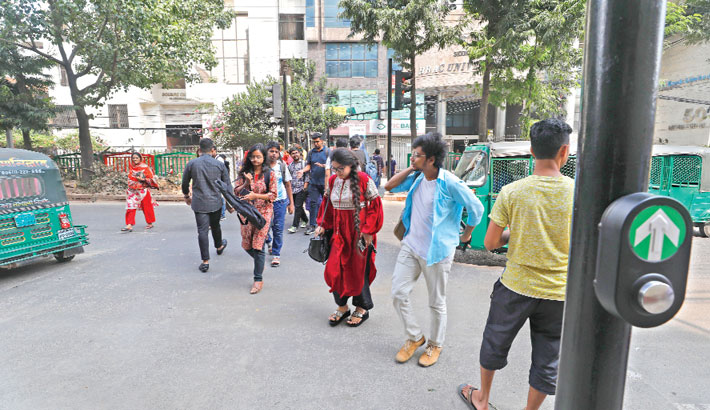 A countdown electronic signal has been installed on a busy road in the capital. A pedestrian wishing to cross the road has to push the button of the device and wait for green signal. The photo was taken from BRAC University area at Mohakhali on Saturday. - Kamrul Islam Ratan

Pedestrians, especially students, elderly and the physically challenged, are set to get automated road crossing system in capital Dhaka aimed at reducing accidents and loss of lives.

The Dhaka North City Corporation (DNCC) has adopted the projects. It has installed the system in two spots, while 20 more are likely to be completed set up within this year. This system will be introduced in 28 other places next year.

Pedestrians always cross the road taking risking life as many of them are reluctant do use foot-over bridge or even green light for vehicles. There is no foot over bridge in many spots. Children, physically challenged, elderly and sick people are sometimes unable to use such bridges often falling prey to road accidents.

There are zebra crossings in many spots but drivers of motorized vehicles do not follow rules to first allow the pedestrians to cross.

Against this backdrop, Dhaka City Corporation decided to install technology based push button time countdown signals for pedestrian crossing of the roads.

The DNCC authorities said they would at least install 22 the advanced push button system on the pedestrian crossing at different points under its jurisdiction inline with Mayor Atiqul Islam’s pledge to ensure safety for the pedestrians.

Talking to the daily sun, DNCC assistant engineer (Civil) Nayeem Rayhan Khan said, “As a pilot basis, we have installed two push buttons systems at two pedestrian crossings. One is in front of Saint Xavier’s Green Herald School and the other in front of the BRAC University in Mohakhali.”

“Under this year’s budget, we have decided that install 20 such push button system for pedestrian crossings besides the two. Besides, we have taken steps to install the systems on three spots that are near police plaza, Finix crossing, and in front of Confidence Tower as per suggestion of the police,” he said.

The DNCC said in a statement that “Civil work of the two pedestrian crossings has been done. For physically challenged people, we have made the footpath and median zero slope. Only the work of road marking is yet to be done.”

The DNCC spent  Tk 9.2 lakhs for the installation of the two push buttons signals with countdown timer.

On Friday, this correspondent went to have a look at the system installed in front of St Francis Xavier’s Green Herald International School at Mohammadpur and found that four poles were installed on the crossings with countdown timer and signals.

The DNCC officials said that as per request of their own officials and traffic department of police 48 spots for the installation of push button system with countdown signals for pedestrians crossing. Measures have been taken to install technologically advanced system for 20 spots this year and rest will be done next year.