Akshay on Housefull 4 look: Not trying to ape anyone 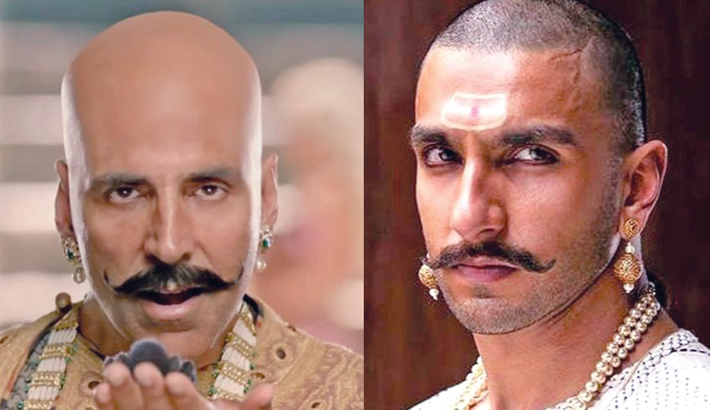 Bollywood superstar Akshay Kumar, who is playing a fictional historical character named Rajkumar Bala in Housefull 4, has said that makers of the forthcoming comedy-drama film haven't tried to ape any character from previous films, reports IANS.

Akshay Kumar was interacting with the media to promote Housefull 4 along his co-actors Ritiesh Deshmukh, Bobby Deol, Kriti Sanon, Pooja Hegde, Kriti Kharbanda and Chunky Panday on Thursday in Mumbai.

The story of Housefull 4 is based on reincarnation, spanning a period of 600 years from 1419 to 2019, and ever since the film's trailer was released, many people have pointed out similarities between Akshay's character and Ranveer Singh's look in Bajirao Masatani. Both characters are bald and based in history, and also have similar get-up and costume.

"If that's the case then are you trying to tell me that all bald characters will have some sort of similarity with Ranveer's look in Bajirao Mastani? We are not trying to ape anybody in our film," Akshay said.

He added: "In the film, my character had a lot of hair when he was born, so his father names him Rajkumar Bala. However, two years later after his shahi mundan (ceremony where a child's hair is shaved off and offered to the Gods), hair never grows on his head and he becomes bald. So, he gets very angry with the people who have hair on their head and beats them up or scratches their hair."

On Wednesday, team of Housefull 4 took a special train journey from Mumbai to Delhi to promote the film. Talking about the unique promotional activity, Akshay said: "Generally, we don't spend much time with the media because of our busy schedules, so we decided to invite the media for our train journey so that we can have some fun together."

Ritiesh Deshmukh has been a part of Housefull franchise since its first part. He said, "For me, working in Housefull 4 means getting back with close friends and having a great time, enjoying a paid holiday and working with people with whom I have never worked before. Through this franchise, I get the opportunity to work with lovely actors and that's great fun for me."

Housefull 4 is directed by Farhad Samji, and produced by Sajid Nadiadwala. The film is scheduled for an October 26 release.