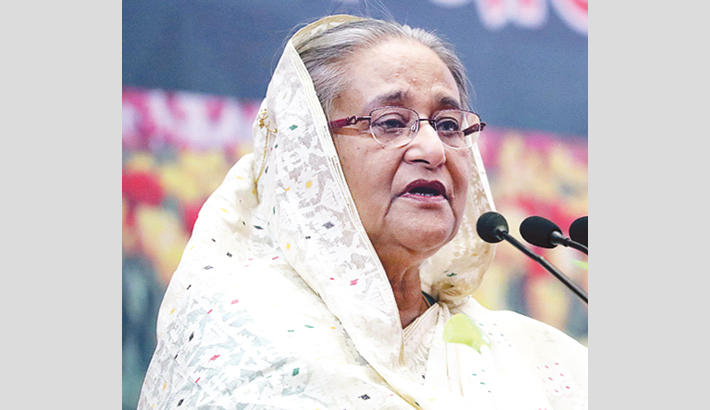 Prime Minister Sheikh Hasina on Friday categorically declared that those involved in child repression and killing will be handed down severe punishment.

“Those who’ll be involved in child oppression and killing will have to embrace tough to tougher punishment,” she said while addressing a discussion meeting and award distribution ceremony at Bangabandhu International Conference Center (BICC), according to UNB..

Sheikh Russel Jatiya Shishu Kishore Parishad organised the programme to observe the birth anniversary of the youngest child of the Father of the Nation Bangabandhu Sheikh Mujibur Rahman, Sheikh Russel.

Sheikh Hasina, the eldest sister of Sheikh Russel, said the government wants that no child will face killing and all children will live in a beautiful atmosphere.

“Every child will have their meaningful life. That’s our only aim,” she said.

Five-year-old Tuhin Hasan was killed by his father Abdul Basir, uncle Nasir Uddin and cousin Shahriar. Their goal was to frame their opponents.

Tuhin’s mutilated body was found hanging from a tree near the family’s home at Kejaura village under Derai upazila’s Rajanagar union. The child’s body bore stab wounds, his throat was slit and his ears and genitals cut off. Two knives used in the murder were also left jammed in Tuhin’s abdomen.

The news of the murder and photos of Tuhin’s dead body went viral on social media, drawing much condemnation from netizens.

Sheikh Hasina said the murder of Sheikh Russel on August 15, 1975, and the enacted law to save the killers had a huge impact on the society.

“We’re witnessing some incidents of inhumane oppression of children in recent times. If appropriate measures were taken at that time (after the brutal killings of August 15), at least the people would have been afraid of doing such things,” she said.

The Prime Minister was astonished how a father could kill his son to frame the rivals. “What a perverted mentality!” she said. She held responsible the persons who came to power after August 15 as they never thought about the country, people and the nation.

The Prime Minister urged the children and youths of the county to stay away from terrorism, militancy and drugs.

She requested all to lead an honest life.

Sheikh Hasina said there is a hidden spirit and power in all children. “You have to build yourself. That is the best thing,” she said.

Describing various parts of Sheikh Russel’s life she said Russel inherited a kind heart. “If he had lived, he could have done a lot for the country,” she added.

Today is the 56th birthday of Sheikh Russel, also the youngest brother of Prime Minister Sheikh Hasina. He was born on October 18, 1964 at the historic Bangabandhu Bhaban at Dhanmondi. He was assassinated on August 15, 1975.

Sheikh Russel was brutally killed along with most of his family members, including his father Bangabandhu Sheikh Mujibur Rahman, when he was a student of class four at University Laboratory School.

Earlier, the Prime Minister distributed prizes among the winners and later witnessed a colourful cultural programme.