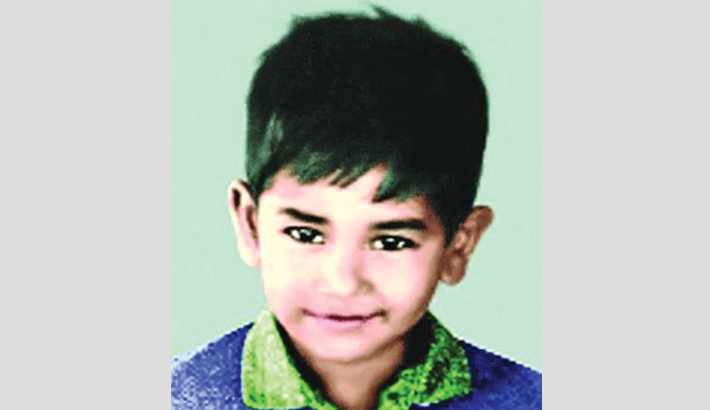 It is Sheikh Russel’s birthday today. Yet it is remembered in tears by his “Hasu Apa” —- Prime Minister Sheikh Hasina who always breaks down talking about her 10-year-old brother who was killed brutally by some wayward men who shamed human history by their inhuman act in 1975.

“What did my younger brother do that they had to kill him? Why Russell?” the premier asks in remembering her loving younger brother whenever she talks about the shameless killing in 1975.

In the 15 August 1975 coup, carried out by a handful of pro-Pakistani disgruntled officers, brought joy to Bengalis who still wanted to live as slaves of the former West Pakistan, but shocked most Bangladeshis. It was clear that the coup leaders’ sole enemy was Bangabandhu and his ruling Awami League, which led the nation to its independence in 1971.

The killing started with Bangabandhu at his private home, on Dhanmandi’s Road 32. The killers wiped out all the members of the Sheikh family, while smaller units moved to kill the nearest relatives of Bangabandhu. It was possibly from a fear that if one member of the family survived, the Awami League would return to power again.

The 1975 coup leaders led by executed colonel Faruq Rahman and fugitive Colonel Rashid, among others, did not spare Bangabandhu's most loving child, 10-year-old Sheikh Russel. They also killed little Arif Serniabat and Sukanto Abdullah, kin of Bangabandhu, possibly because they were male heirs of the Sheikh family and future leaders.

Bangabandhu's youngest son, Sheikh Russel, was born in Dhaka on 18 October 1964. At the time of his death, Russel was a student of Class Four at Dhaka University Laboratory School. According to articles written by those close to the family, including Prime Minister Sheikh Hasina herself, Russell did not get much of his father due to the latter's political activities that sent him to jail again and again.

His house tutor says that “the kid had sympathy for the poor. He used to give away gifts as donations. Whenever he found any poor being cheated, Russell would take him to his father and complain."

Russell had strong determination of mind. In the house tutor Gitali's words: "Once he failed to pass in mathematics in the half-yearly examinations. So (Sheikh) Rehana snubbed him. But when I told him that I would take the poison, he promptly told me to wait until next time [final exams].”

"And he did it. Showing the result card, Russell told me not to take poison. 'I've succeeded', he said."

On 15 August 1975, Russel pleaded to the coup leaders that he be taken to his mother, not knowing she had already been killed. "The killers, in a macabre moment, made him walk past the bodies of his close ones. Finally, when he confronted his mother's body sprawled in the lobby, he burst into tears.

“Take me to Hasu Apa (Sheikh Hasina),” he said. But Sheikh Hasina and her younger sister, Sheikh Rehana, were abroad at that time, meaning Russell wanted to live very much and had possibly thought he would survive if he could go abroad to his sisters.

But, instead of having a little mercy or pity on a child begging for his life, they shot him. He was the last person to be killed on that dark night, the most shameful chapter in the country's history. Sheikh Kamal, the eldest son, was the first man to be shot dead.

Muhitul Islam, personal assistant to Bangabandhu, in his deposition to a court in the Bangabandhu Murder Case, said that some army men consoled Russel saying that he was being taken to his mother.

"Russel was trying to take shelter in my lap," Muhitul said. But the army men snatched him and at one point took him upstairs as he was crying to go to his mother, Begum Fazilatunnesa Mujib. They brought him back downstairs." Before killing, they showed Russel the lifeless body of his father and our dear Bangabandhu.

He wrote "Amidst the killing spree, Russel ran downstairs and sought refuge in the Staff Room of the President (Bangabandhu). Abdur Rahman Roma, who had been taking care of Russel for long, held the child's hand at that moment. After some time, one soldier took Russel away saying he would be sent out of the house. Russel cried and begged to spare his life for the sake of Allah.

A sentry couldn't stand this heart-touching begging anymore and hid him in the sentry box at the main gate of the house. But after about half an hour, an army Major saw Russel and took him upstairs and killed him in cold blood with a revolver."

"Allah's sake, please spare my life. My Hasu Apa is in Germany with my brother-in-law. Please I kneel before you, please send me to Germany to them." This was the last appeal of this 10-year-old boy.

Bertrand Russell was Bangabandhu's favourite philosopher and thus he named his youngest son after the philosopher.

"A F M Modasser Ali depicted the colourful boyhood of Sheikh Russel. Russel loved to play with pigeons. Bangabandhu used to release pigeons as symbols of peace on different occasions. Russel loved his pet dog called Tommy and spent a lot of time playing with him. Sheikh Hasina can now at least console herself while remembering her baby Russel that it was not possible to bring him back, but she had successfully put the murderers on trial and they were executed after the country’s highest court sent them to the gallows.  This trial was blocked by the Indemnity Ordinance, an unprecedented constitutional act which prohibited the trial of 1975 killers. Sheikh Hasina repealed the law.

When she came to power for the first time in 1996 which was not only an act to put the killers on trial, but it ended an official order of impunity for criminals.

We join our Prime Minister Sheikh Hasina in the joy of Russel’s birthday, who – if alive –would have been a handsome man of 55 by now, and also share her grief in losing a loving brother. May Sheikh Russel sleep in the tender care of Allah.

The writer is the Consulting Editor of