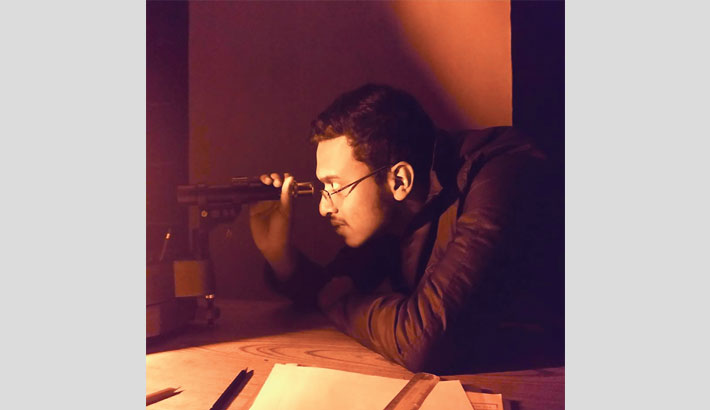 When Abrar Fahad, a second-year student of the Department of Electrical and Electronic Engineering (EEE) of Bangladesh University of Engineering and Technology (BUET), was summoned by a group of Bangladesh Chhatra League (BCL) leaders of BUET unit to the notorious room number 2011 of the Sher-e-Bangla Hall on the fateful night of October 6, he was busy solving an equation in his dormitory room. Maybe he was a bit irritated by the call and was thinking of returning to his reading table as soon as possible for completing the 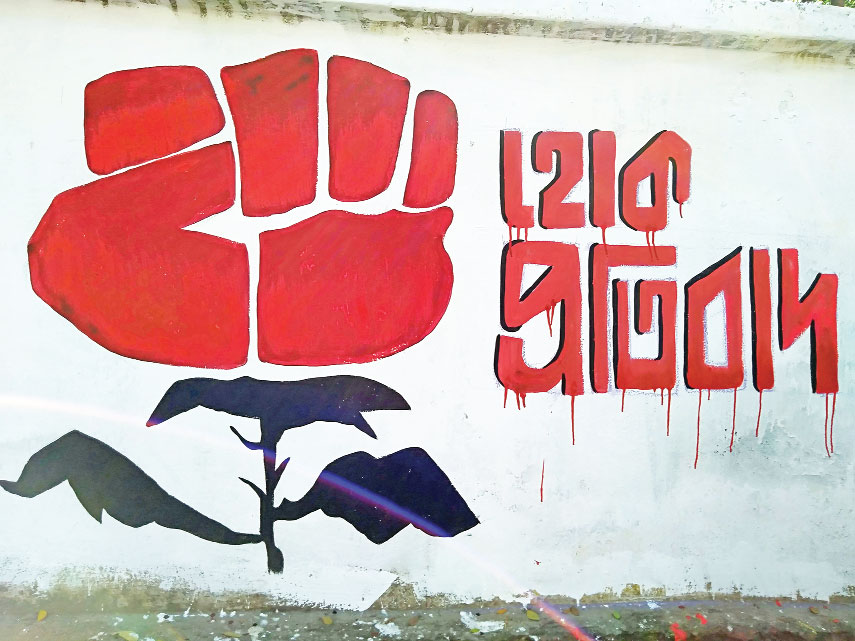 unfinished equation. But his seniors had a different plan. They questioned him about his last facebook status that reflected his thoughts on the recent official agreements and MoUs signed between Bangladesh and India. Abrar’s opinion about the deals could not satisfy BCL men. Therefore labeling him as an Islami Chhatra Shibir activist they began beating him with cricket stumps and bamboo sticks and continued it for several hours. In the meantime, some of them went out for a while and returned to resume the beating. He eventually died due to internal bleeding and excessive pain! The cruel killing of Abrar by the BCL leaders has opened the old Pandora’s Box again and uncovered the bitter truth of how the student wing of ruling party has been dominating the campuses of different public universities for years establishing a reign of terror in most of the student halls and how even after observing all these ill practices of torture and ragging the university administration has been failing to take action against the perpetrators. This horrible murder of the promising young man shocked the whole nation. It is a common belief that BUET is one of the top educational institutions of the country where only meritorious, above-average students can study. Thus when people have found that some of the promising students who could probably have done remarkable things in life brutally attacked and killed one of their brilliant mates, they have become speechless. To their utter surprise, they couldn’t realise that how and why some of the brightest boys of the country have turned into ruthless killers.

Well, there are many reasons that have resulted in such a situation. In most cases public universities of our country are not operated 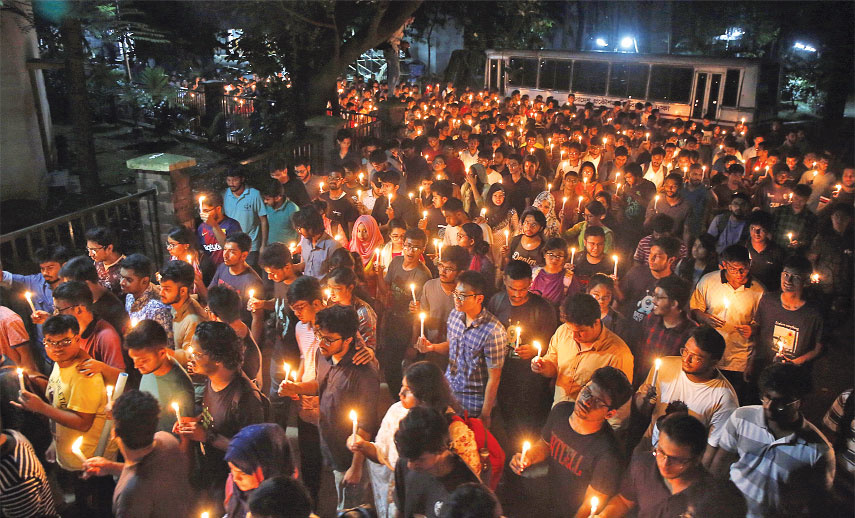 following the laws. Political background of the teachers is considered as the most important prerequisite for recruiting them in the major posts of the university administration. As a result, instead of addressing the inconveniences of the mass students, top guns of the universities try to remain loyal to their political masters by patronising the unethical activities of their student wings. In the process many of them get involved in different immoral activities. Attitudes of some public university vice-chancellors, proctors, deans and provosts during a few recent incidents testify this fact. Due to this unethical practice greedy administrators of public universities don’t feel any compassion for the ordinary students. They leave everything to the student wing of the ruling party and hardly monitor what is happening in the halls and how the ordinary students are treated there.

No matter which party is in power, public universities of Bangladesh allow the members of the student wing of the ruling party to control their residential halls. Through grabbing tenders, collecting extortions, allocating seats, making borders bound to join each of their political programme, torturing them and ensuring all other facilities they create a shadow administration consisting of their cadres so that regular students cannot go beyond their control and conduct any political activity that can pose threat to the government. Usually it is expected that student organisations will be vocal for the causes of the ordinary students and they will attract them by conducting pro-student programmes. But as the practice of student council election is completely absent and students belonging to opposition parties’ student wings are not 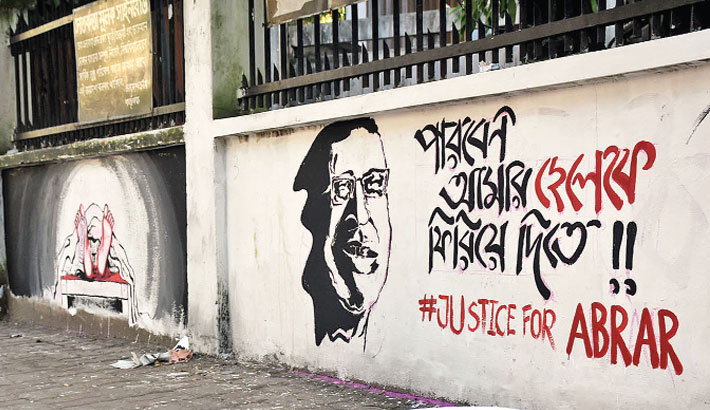 allowed to conduct their programmes in almost all the university campuses, leading student organisations don’t feel the necessity to be accountable to the mass students. Hence maximum student leaders of the ruling party’s student wing do nothing but secure their personal interests. And despite watching all the irregularities of the student units of the ruling party and harassments of ordinary students, university authorities keep mum.

Public universities are not isolated islands. These institutions, their teachers, employees and students belong to our society. Therefore they are very much influenced by the incidents that take place in other sectors of our country. Yet people expect that the universities will play the role of lighthouse to guide the society into the right direction by practicing ethics, nurturing values and developing dignified individuals. But unfortunately most of the public universities of our country have failed utterly in this regard. While facilitating the leaders of ruling party’s student wing they have lost control of their own campuses. This has provided a freehand to the leaders and activists of Chhatra League. These student leaders have started enjoying unlimited and uncontrolled power and believing that they can do anything and everything on the campus. They have enjoyed unbridled power at an age when they are neither prepared nor mature enough to handle it. Consequently we see that many of them have become so reckless that they are not only misusing their position but also establishing interrogation and torture cells to harass and abuse the ordinary students.

Delays in investigations and the tendency of awarding no punishment to the perpetrators of ghastly campus murders have encouraged a culture of impunity at the public universities. Over the years such culture has encouraged and emboldened criminals to commit more dreadful acts of violence with a certainty that the law will not take its course in these cases. It is mentionable that since independence there have been 151 killings on various university and college campuses. Among them at least 24 students were killed in the last ten years. Most of these students were Chhatra League leaders and activists who became the victims of internal rivalry. But none of the killers had to face the music for their crimes! Verdicts of only two campus murders have been delivered so far. In BUET student Sabequn Nahar Sony’s (who was killed when two factions of Jatiyatabadi Chhatra Dal exchanged fire in June 2002) case the High Court awarded life imprisonment to three absentee killers in March 2006. And in Jahangirnagar University student Zubair Ahmed’s (who was tortured and stabbed to death by some BCL men in January 2012) case the High Court sentenced five BCL men to death in 2018. But, all the killers escaped the country! If proper justice could be delivered in the previous cases, Abrar’s story could have been different.

Amidst all these depressing facts the good thing is that most of the students accused of killing Abrar Fahad have been captured by the law enforcement agencies and some of them already have made confessional statements. If the following procedures are taken properly, the nation can expect that the perpetrators will be punished. But nothing can erase the questions that the gruesome killing of Abrar Fahad has given birth to regarding our whole education system. What sort of educational institutions have we created which are bringing out the worst out of our students instead of their best? What kind of education are these institutions imparting when some their students have lost their basic human values? Why do the teachers of these institutions remain silent even after seeing such brutalities and irrationalities every day? How can this nation depend on the university administrations that can’t guarantee the minimum academic ambience and safety for the students? The truth is that Abrar Fahad was not killed by only a few Chhatra League leaders. Our whole faulty system is equally responsible for creating such a situation when some murderers feel that they are above the law. If our policymakers seriously address these questions, only then they will be able to prevent the repetition of another campus murder.