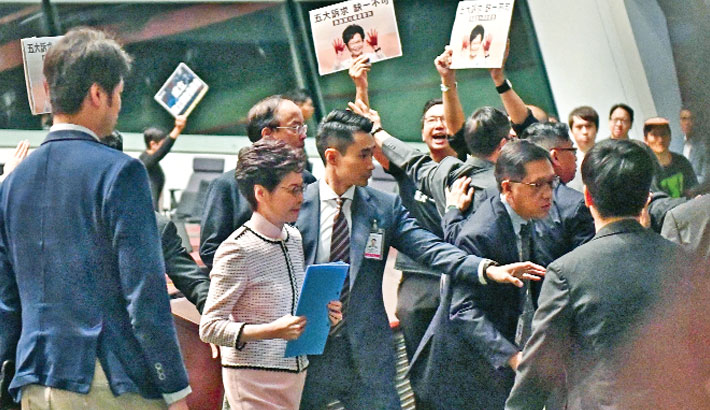 Hong Kong’s Chief Executive Carrie Lam (2nd L) leaves the chamber for a second time while trying to give her annual policy address as she is heckled by pro-democracy lawmakers (at background) at the Legislative Council (Legco) in Hong Kong on Wednesday. – AFP PHOTO

HONG KONG: Calling her “the mother of the mafia police,” yelling pro-democracy lawmakers twice forced Hong Kong leader Carrie Lam to stop delivering a speech laying out her policy objectives Wednesday and then clamored for her resignation in chaotic scenes that caused her to walk out of the legislature, reports AP.

Lam was able to deliver the annual address more than an hour later by video, but the hostile reception inside the Legislative Council marked a slap in the face for the embattled chief executive grappling with anti-government protests now in their fifth month. When Lam started delivering the speech, she was shouted down by chanting pro-democracy lawmakers who held aloft placards showing her waving with hands colored blood-red. They also used a projector to light up Lam’s face and the wall behind her with protesters’ key demands.

Lam left the chamber and then came back about 20 minutes later to try again, only to be met with further fury. One legislator brandishing a placard climbed onto a desk. Again, the council president stopped the session and Lam left. One lawmaker wearing a paper mask showing the face of Chinese President Xi Jinping tossed a placard as Lam walked out.

Finally, 75 minutes after the previously scheduled start of the lengthy address, Lam delivered it via video link, with China’s yellow-starred red flag to her right and Hong Kong’s flag on her left. Describing the semi-autonomous Chinese territory as going through “major crisis,” Lam said: “People are asking: Will Hong Kong return to normal?”

She appealed for its 7.5 million citizens to “cherish the city,” warning that “continued violence and spread of hatred will erode the core values of Hong Kong.”

Standing ramrod-straight, she then launched into a dry and detailed explanation of plans to tackle Hong Kong’s shortage of affordable housing, a long-standing source of discontent, and other welfare issues. With its focus on such minutiae as building new tunnels and freeing up land for development, the 50-minute speech titled “Treasure Hong Kong our home” only fueled criticism that Lam is deaf to protesters’ concerns about the future of the territory’s freedoms, unique in China.

In a subsequent news conference, Lam again made clear that she wouldn’t resign and insisted there has been no erosion “whatsoever” of Hong Kong’s freedoms. “Hong Kong is still a very free society,” she said.

Meanwhile, the US House of Representatives passed a bill on Tuesday sought by pro-democracy protesters in Hong Kong that aims to defend civil rights in the semi-autonomous territory, prompting an angry response from China, reports AFP.

The Hong Kong Human Rights and Democracy Act, which will now move to the Senate before it can become law, has drawn rare bipartisan support in a polarized Congress. The law would end the Hong Kong-US special trading status unless the State Department certifies annually that city authorities are respecting human rights and the rule of law.

Lam had been bracing for trouble in the chamber as her government battles the protests that started in June over a contested extradition bill and have snowballed into a sustained anti-government, anti-police and anti-China movement.

The widespread use of tear gas by riot-control squads and 2,600 arrests, widely decried as heavy handed, have triggered public disgust with the 30,000-strong police force once considered among Asia’s finest. Hardcore black-clad and masked protesters have responded with widespread vandalism of China-linked businesses, subway stations and other targets, and attacked police with gasoline bombs and other weapons.

This month, two police shootings that injured teenage protesters, the stabbing of a police officer, and the detonation of a small, remote-controlled bomb close to police officers ratcheted up violence to levels unprecedented since the former British colony reverted to Chinese rule in 1997.

Saying rioters are “spreading chaos and fear,” Lam appealed for order and sought to end her address on a positive note. Her Facebook profile was updated before she spoke, with a photo of a smiling Lam against a backdrop of a rainbow over Hong Kong’s harbor.

“We have to put aside differences and stop attacking each other,” she said. “I thoroughly believe that Hong Kong will be able to ride out this storm and move on.”