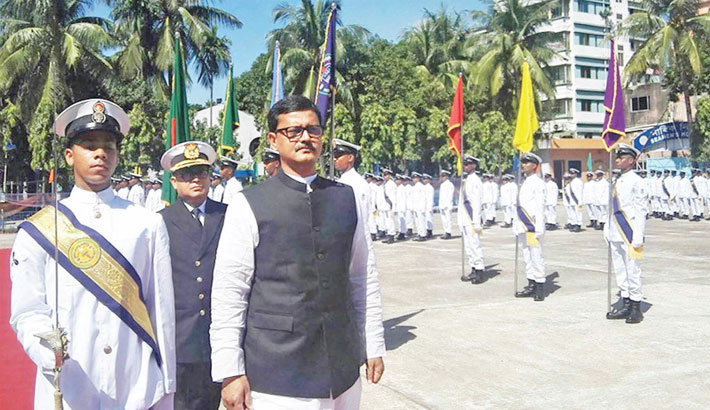 State Minister for Shipping Khalid Mahmud Chowdhury reviews a parade during the education completion programme of the ratings at the National Maritime Institute in Chattogram on Tuesday. – SUN PHOTO

State Minister for Shipping Khalid Mahmud Chowdhury urged the trainees who completed training from the National Maritime Institute (NMI) to perform their duties with honesty and sincerity to uphold image of the country in the international maritime sector.

He said this while addressing as the chief guest at the passing out ceremony of the 20th batch (Chattogram) and 9th Batch (Madaripur branch) pre-sea ratings of NMI in the city’s South Halishahar area on Tuesday.

Addressing the ceremony, the state minister said the NMI was given permission for conducting the pre-sea rating course as part of the plan of turning it as centre for all maritime activities of the country.

“To implement the plan, the six-storey Shaheed Captain Sheikh Kamal Complex and Advance Fire-Fighting Block’ was constructed and a project for collecting simulator to increase quality of training was approved by the Planning Commission,” he said.

Besides, another project titled ‘Bangamata Sheikh Fazilatunnesa Maritime Complex’ was also taken for development of the institute further, said the state minister.

“The quality of this institute is international standard and recognised by the International Maritime Organisation and maritime safety agency of European Union,” said Khalid.

The Prime Minister Sheikh Hasina has been taking the sector forward following ideology of the Father of the Nation Bangabandhu Sheikh Mujibur Rahman, he said.

“The Maritime Institutes of the country are putting efforts for creating skilled manpower for the sector and it created opportunity for working in the ship-building sector along the shipping sector,” said the state minister.

The government has also been working for implementing the vision 2021 and building a golden Bangladesh as dreamt by the Bangabandhu, he said.

Trainees from other departments were also awarded prizes while four received the ‘Summit Alliance Scholarship’ this year.