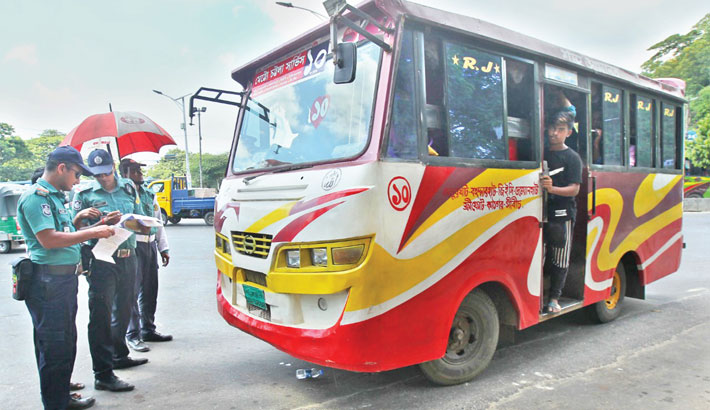 Traffic sergeants check documents of a vehicle as part of a special drive launched to bring discipline in transport sector in the port city. The photo was taken from Tigerpass intersection. – Rabin Chowdhury

The traffic department of Chattogram Metropolitan Police (CMP) has launched a special drive to bring discipline and reduce harassment in transport sector in the port city.

The initiative aims to bring the disciplines through confirming and ensuring license of drivers, documents and fitness of the vehicles, ticketing system, uniform for drivers, designated places for taking and dropping passengers and traffic laws among others, said sources in the department.

Among the 13 routes of the city, the initiative was initially launched in the route number 6 and 10 and it will be implemented in the rest routes gradually, they said.

The traffic department initiated the move after getting huge complaints from the passengers.

The initiative is being implemented after holding several meetings with vehicles owners and workers, they said.

Source said there are some 205 vehicles like bus and minibus enlisted for route no 10 (Kalurghat to Sea Beach) and 150 vehicles for route no 6 (Laldighir Parr to Patenga Sea Beach).

The traffic department also fixed 35 points in the routes for taking and dropping passengers and removed the vehicles lacking route permit and other documents including driving licenses of drivers.

Passengers were complaining that the vehicles don’t complete their fixed route and drop the passengers at midway at their will.

Vehicles defy the route mostly when workers from EPZs start returning home in the evening.

Traffic department set up monitoring cells in the starting and ending points of the two routes and they check the necessary documents of the buses twice.

Some vehicles of the routes remained off the roads to avert actions for their faults while some were withdrawn from the line due to lack of route permit.

Contacted, the CMP Deputy Commissioner (DC-Port) Md Tareq Ahmed of the Traffic department told the daily sun that they started getting benefit of the initiative as two-third of the vehicles are following the rules.

“We started the initiative under traffic law to improve the communication system. But, cooperation from the vehicle owners, workers and passengers is imperative,” he said. Traffic authority is mainly working to raise awareness among the bus drivers and helpers in the primary level and action will be taken against them later, said the DC.

He observed that it will take time for proper implementation of the initiative.

The DC informed that they will continue the drive until bringing discipline in this sector and ensuring comfortable journey for the passengers.

He also laid emphasis on cooperation by the stakeholders for making the initiative successful.

While visiting the various points including GEC, New Market, Tigerpass, Agrabad and Wasa in the city, this correspondent noticed discipline started coming back to traffic system while many of the drivers were defying the traffic laws.

Some buses were found not completing the route while drivers were driving vehicles without uniform and ticket for passengers.

Liton, a passenger of route no 10, alleged that some buses still take the passengers from undesignated spots and demand additional fare.

“But, many are completing the route now following the initiative taken by the traffic department,” he said.

“We saw a little impact of the initiative over the last few days as some bus owners and drivers are still breaking the laws,” he said.

The authority will have to take actions against them, otherwise the initiative will not be successful one, he feared.

Source said passengers face acute transport crisis during closing hours of EPZs as most of the buses ply as reserved taking the factory workers at that time.

Chattogram City Corporation (CCC) is responsible for the situation. However, the CCC took initiatives to construct some overpasses in the city to address the crisis.

However, the city dwellers welcomed the initiative of the Traffic department and hoped to see discipline in the roads for safe movement in the city.