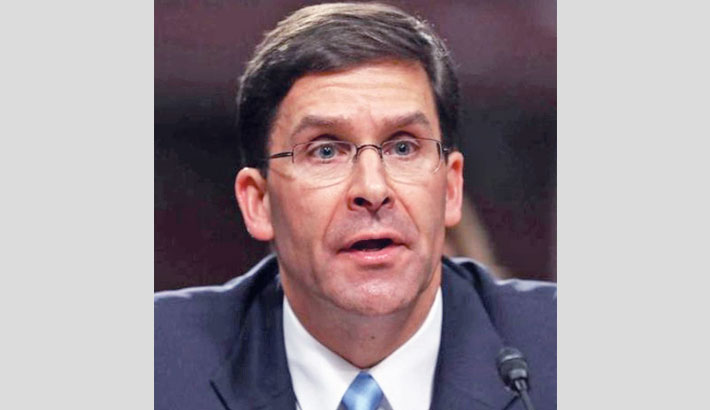 Esper said his department would try to comply with a subpoena from House Democrats seeking records relating to the withholding of US military aid to Ukraine.

“We will do everything we can to cooperate with the Congress,” Esper said on CBS’s “Face The Nation.”

His reassurance came days after the White House announced it would not cooperate with the Democratic-led House of Representatives, calling its impeachment push illegitimate and unconstitutional.

Democrats are seeking information related to Trump pressing his Ukrainian counterpart to uncover dirt on 2020 US presidential contender Joe Biden—and the alleged conditioning of military aid on that favor.

Democrats have slapped subpoenas on the Pentagon and White House, demanding documents tied to Trump’s withholding of almost $400 million desperately needed by Kiev in its conflict with Russia over Moscow’s 2014 annexation of Crimea.

Esper told “Fox News Sunday” that administration officials and Trump himself may place restrictions on the release of documents demanded by the subpoena.

“I don’t know the status of what that document preparation is. I don’t know what restrictions they will have internally,” Esper said.

“The White House has a say on the release of documents as well. There are a number of things that play into this.”

Democrats obtained a string of text messages between US diplomats that showed the Trump administration’s effort to pressure Ukraine into investigating Biden and his son Hunter, and that some diplomats in the text chain expressed concern that such actions were inappropriate.

On Tuesday, Trump’s White House counsel Pat Cipollone sent senior Democrats an eight-page letter declaring the inquiry illegitimate. The letter has been rejected by experts as having little legal basis.

The Democrats’ subpoenas focus in part is on Trump’s July 25 call with Ukrainian President Volodymyr Zelensky.

A released rough transcript of the call shows the two leaders discussed Zelensky’s desire to receive the military aid, followed by Trump responding that “I would like you to do us a favor though,” and then bringing up Biden.

Esper was asked by Fox News if Trump had explained why he held up the aid, against the guidance of the Pentagon, and replied: “I have nothing to share with you on this.” Details of the call emerged last month in an explosive whistleblower complaint by an unidentified intelligence official.