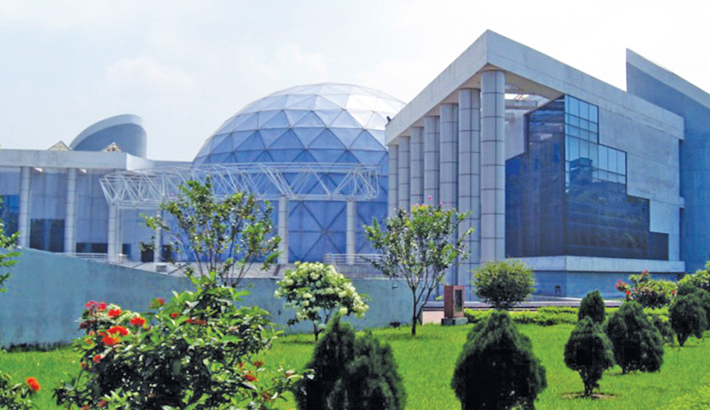 Bangabandhu Sheikh Mujibur Rahman Novo Theatre - a planetarium is an important institution for science-loving people especially the students of schools, colleges and universities. It has been established in the period of 1997-2004 with the cost of taka 12.32 billion as a Non-formal Science Educational Institution by the Ministry of Science and Technology of the govt. of Bangladesh. The main objective of establishing this theatre is to eradicate superstitions and blind faith from the society and to inculcate positive temper in the mind of people specially among the students. This institution is located at Bijoy Sarani, Tejgaon in the centre of capital city- Dhaka.

The vision of the organisation is transforming the centre into a centre of excellence by uncovering the horizon of astronomical science through research on space science. To achieve the vision, this organisation set missions which are -  to cultivate positive attitude towards science in the minds of the people by education through entertainment and to eradicate superstitions about outer space from the society and to encourage young generation to learn science and technology of this informal science education institution.

For this planetarium, a large number of advanced technological instruments have been procured from Japan, America, Korea, France, Italy and India for the planetarium. Not only the planetarium shows a very exciting Ride Simulator, 5D Movie theatre, 5D Interactive Edutainment Simulator, model of planets of solar system, scientific & digital exhibits and some portraits of world-renowned scientists and scholars are also available at the site of novo theatre. Moreover, a 150-seated well-furnished auditorium, 50-seated conference room, hydraulic lifts, ramp and a car parking area having the capacity of 100 vehicles are belonging to the novo theatre. The theatre has a modern tilted domed planetarium combined with a large format motion picture system.

Built on 5.46 acres of land, its spaces range in size from its 21-metre dome, seating 275 people; to three-meter inflatable and portable domes where people sit on the floor.

Designed by architect Ali Imam of Bangladesh, the planetarium dome simulates earth and its cool blue sky. This dome-shaped theater was built with the latest equipment, enabling visitors to soar into space as well as experience the thrills of an interplanetary journey in a three-dimensional environment. The curved ceiling represents the sky and shows moving images of planets and stars through projection onto a large-screen dome at an angle of 120 degrees. This planetarium features three kinds of exhibits. They 'Journey to Infinity' presents a celestial show of stars, planets and other heavenly bodies in virtual reality. This is 'Our Bangladesh' movie features Bangabandhu Sheikh Mujibur Rahman`s 7 March lecture in 1972, while the Grand Canyon describes North America`s settlement clan, Garikhad, which existed in the Grand Canyon four thousand years ago. Visitors need not look up in the dome to watch the show. Instead, they feel they are watching space live, with everything around them, presented by 150 projectors. The Planetarium added a new capsule simulator and smart-step floor and 3D video. In 2013, the planetarium added a Nuclear Industrial Information Centre.

Bangladesh Parjatan Corporation earlier conducted many sightseeing tours to this theatre for school and college students. Many tour operators include the Bangabandhu Novo Theatre in the list of their package tours for tourists.

This institution can be an exponent for spreading knowledge about the universe and evolution of the earth to the students. However, it needs to be strengthened to make more service delivery and viewers friendly. The publicity of this important establishment has to be done in a wider way for its visibility. There may be a collaboration between Bangladesh Parjatan Corporation and the Bangabandhu Sheikh Mujibur Rahman Novo Theatre for effective exhibition and promotion of this institution. Joint publicity and exhibition events may be carried out by these two organisations. This institution should be a focal point for spreading secularism and build a scientific knowledge-based society.