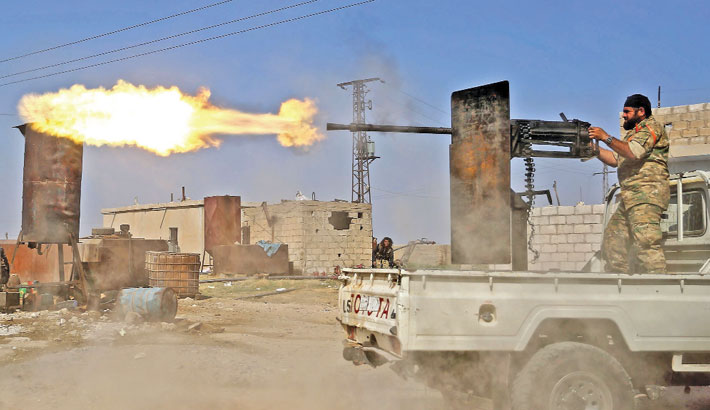 A Turkish-baked Syrian fighter fires during clashes in the border town of Ras al-Ain on Sunday, as Turkey and its allies continue their assault on Kurdish-held border towns in northeastern Syria. —AFP PHOTO

BEIRUT/ISTANBUL: Turkish forces and their Syrian allies seized large parts of the northern Syrian town of Suluk, a war monitor said on Sunday, as they pressed on with their offensive against Kurdish militia for a fifth day in the face of fierce international opposition, reports Reuters.

Turkey is facing threats of possible sanctions from the United States unless it calls off the incursion. Two of its NATO allies, Germany and France, have said they are halting weapons exports to Turkey and the Arab League has denounced the operation.

Ankara launched the cross-border assault against the YPG militia after U.S President Donald Trump withdrew some U.S. troops from the border region. Turkey says the YPG is a terrorist group aligned with Kurdish militants in Turkey.

Suluk is southeast of the Syrian border town of Tel Abyad, one of the two main targets in the incursion, which was shelled by Turkish howitzers on Sunday morning, a witness in the neighboring Turkish town of Akcakale said.

Gunfire also resounded around the Syrian border town of Ras al Ain, some 120 km (75 miles) to the east of Tel Abyad, while Turkish artillery continued to target the area, a Reuters reporter across the border in Turkey’s Ceylanpinar said.

Turkish-backed Syrian rebels, known as the National Army, advanced into Ras al Ain on Saturday but by Sunday there were still conflicting reports on who held control.

A spokesman for the National Army denied this, saying its forces were still in the positions they took on Saturday.

Turkey’s incursion has raised international alarm over its mass displacement of civilians and the possibility of Islamic State militants escaping from Kurdish prisons. The Kurdish-led forces have been key allies for the United States in eliminating the jihadist group from northern Syria.

More than 130,000 people have been displaced from rural areas around Tel Abyad and Ras al Ain as a result of the fighting, the United Nations said on Sunday.

In a statement, the U.N. Office for the Coordination of Humanitarian Affairs said OCHA and other relief agencies estimated up to 400,000 civilians in the Syrian conflict zone may require aid and protection in the coming period.

The Kurdish-led administration for northern and eastern Syria said the offensive was nearing a camp for displaced people holding thousands of members of “Islamic State (IS) families”.