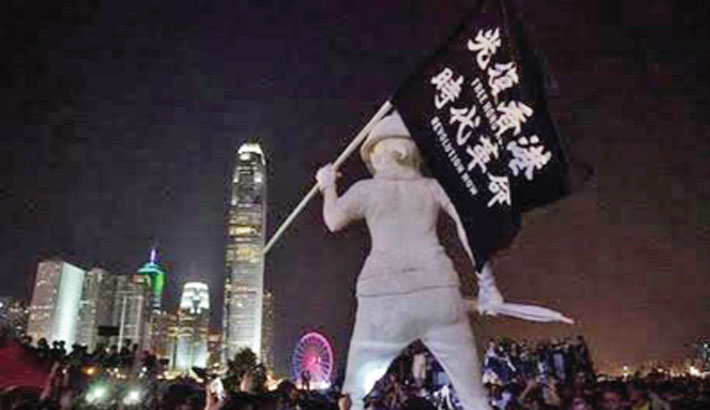 Pro-democracy protesters hauled a four-metre statue known as “Lady Liberty” to the top of a famous Hong Kong mountain early Sunday, announcing the peak would be its “final resting place”, reports AFP.

The statue depicts a female protester in a gas mask, protective goggles and helmet, an umbrella in one hand and a black flag in the other, proclaiming the protest slogan “Liberate Hong Kong, revolution of our times”. It was a regular feature at larger, more peaceful rallies this summer, eliciting cheers when it was wheeled in by volunteers and transported around the city on the back of a truck.

But on Sunday organisers said Lady Liberty had made her final journey as they unveiled her at the top of Lion Rock, a 495-metre peak overlooking a forest of skyscrapers, intimately linked to the city’s democracy movement.

Alex, a 32-year-old protester who created the statue, said volunteers used the cover of night to carry the 80 kilogram (180 pound) artwork up the steep path to the summit.

“We had a team of 16 climbing professionals carrying her in two main pieces all the way to the summit while another 16 members carried equipment and supplies,” he told AFP, only giving his first name.

“Lion Rock will be the final resting place of the Lady Liberty of Hong Kong,” the team said in a statement, adding it would be up to authorities to remove it.

Named because its shape resembles the big cat, Lion Rock has been a symbol of Hong Kong’s pro-democracy movement for years with large banners demanding freedoms or criticising Beijing frequently unfurled by hardy protesters.