Arafat shows his best in NCL 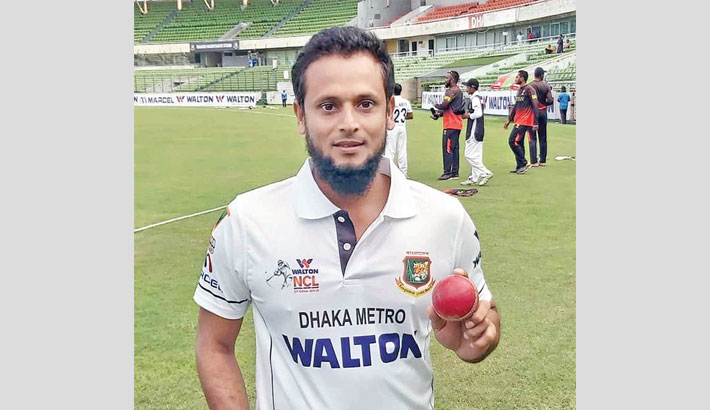 It was Sunny’s 19th five-or-more-wicket haul in the First-class cricket. In the same game, Chattogram batsman Tasamul Haque missed a ton for 10 runs. He was bowled by Arafat.

Batting first after losing the toss, Dhaka Division posted only 240 all-wicket in 76.1 over in their first innings at Khan Shaheb Osman Ali Stadium in Fatullah. They were 143 for seven in 51.5 overs at the end of the day one most of which was interrupted by the rain. Resuming the overnight score, Dhaka ended on 240. Along with Rony Talukdar (63), Taibur Rahman also hit a fifty. He remained unbeaten for 88.

For Rajshahi, left-arm spinner Taijul Islam scalped four wickets, Shafiul Islam took three and Farhad Reza bagged two.  In reply, Rajshahi ended the day on 173 for six in 66 overs. Former national captain Mushfiqur Rahim hit 75 for Rajshahi while Jahurul Islam Omi remained unbeaten for 57. Farhad is the other batsman who was in the wicket for 14 at the end of the day.

The other game of Tier-one between Rangpur and Khulna kicked off today as the day one was washed out due to persistent rain. Khulna won the toss in this match and opted to bowl first at Sheikh Abu Naser Stadium in Khulna.  Rangpur ended the day on 169 for five in 72 overs. Naeem Islam hit 48 while Tanbir Hyder and Sohrawordi Shuvo were batting respectively for 40 and 31.

Meanwhile, Chattogram Division posted 290 all-wicket in 122.5 overs riding on the bats of Tasamul Haque and Sadiqur Rahman after winning the toss and opted to bat on the day one at Sher-e-Bangla National Cricket Stadium. Resuming their overnight score (147 for three in 52 overs), Chattogram ended on 290.

Tasamul was unbeaten for 17 at the premature end of day one due to the rain. He ended on 90 off 249 while the other unbeaten batsman Pinak Ghosh fell for 32.

In reply, Dhaka Metro ended the day two scoring 66 for two in 24 overs. The openers Shadman Islam and Rakin Ahmed failed to set up a good start for Dhaka as they fell for 6 and 8 respectively.

The other game of Tier-two between Sylhet and Barishal, began Friday as the first day was washed out due to constant rain at Shaheed Qamaruzzam Stadium in Rajshahi.

Barishal won the toss and opted to bowl first. Sylhet ended the scoring 68 for three in 31 overs. Zakir Hasan and Alok Kapali were batting respectively for 32 and 8.