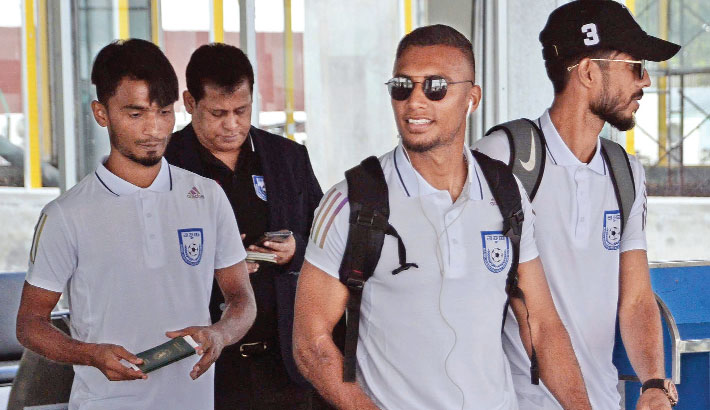 Bangladesh National Football Team reached India on Friday to take part in their FIFA World Cup 2022 and AFC Asian Cup 2023 qualifier match against a much stronger India on October 15.

Following their sensational show against Qatar on Friday where the valiant Bangladesh booters performed sensationally to walk with a 0-2 defeat, Bangladesh can surely expected to pull off an upset against India.

Bangladesh will take on India for their FIFA World Cup and AFC Cup qualifiers at Salt Lake Stadium in Kolkata on October 15.

Bangladesh, who were put on Group E of the AFC Cup with Qatar, Oman, neighboring India and Afghanistan, started their campaign with a 0-1 goal defeat against Afghanistan in their first math at the Central Republican Stadium in the Tajik capital Dushanbe on September 10.

In the remaining group matches, Bangladesh will play against Oman on November 14 in Oman, Afghanistan on March 26 next year in Bangladesh, Qatar on March 31 in Qatar, India on June 4 in Bangladesh and Oman on June 9 in Bangladesh.

India played out a goalless draw (0-0) with Qatar on September 1 at Jassim Bin Hamad Stadium in Doha.

Earlier, Bangladesh fought hard against Qatar as the Men in Maroon edged past Bangladesh by 2-0 goals at Bangabandhu National Stadium in the capital on Thursday.

It was the match of defence for Bangladesh as they were mostly focused on defending and they did it with all their might.

But despite the sensational defending, Bangladesh had to concede the first goal courtesy of sheer brilliance of Yusuf Abdurisag who took the opportunity of being unmarked to put in a small pass from the right wing into the nets on 28th minute of the match.

In the final minutes of the first half, Bangladesh attempted to ravage Qatar’s defence, as they launched back to back attacks but couldn’t execute the all-important finish.

The second half was marked by Bangladesh going all out but still couldn’t score the elusive goal. Bangladesh created a lot of chances Bangladesh’s attacks were piercing but not effective as they were halted by Qatar’s defence.

But Qatar were not bogged down by the never ending attacks as their substitute forward Karim Boudiaf utilised a goal-line maelee to perfection on the second minute of extra-time to double their lead.