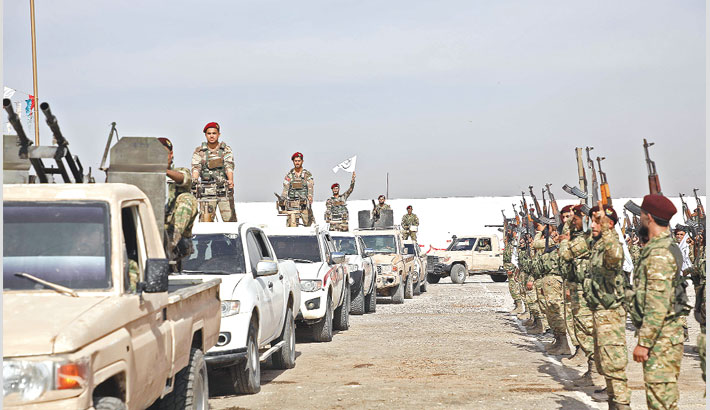 Turkish-backed Syrian rebels gather in al-Bab city in the eastern countryside of Aleppo province on Friday as they prepare to take part in Turkey’s invasion of northeastern Syria. –AFP PHOTO

ISTANBUL: Turkish warplanes and artillery hit Kurdish militia targets in northeast Syria on the third day of an offensive that has killed hundreds of people, forced tens of thousands to flee and turned Washington’s establishment against President Donald Trump, reports Reuters.

The incursion, launched after Trump withdrew US troops who had been fighting alongside Kurdish forces against Islamic State militants, has opened a new front in the eight-year-old Syrian civil war and drawn fierce international criticism.

In Washington, Trump suggested that the United States could mediate in the conflict. He also raised the possibility of imposing tough sanctions on Turkey. On Friday morning, Turkish warplanes and artillery struck around Syria’s Ras al Ain, one of two border towns that have been the focus of the offensive.

Gunfire could also be heard inside the town, said a Reuters journalist in Ceylanpinar, on the Turkish side of the border. A convoy of 20 armored vehicles carrying Turkish-allied Syrian rebels entered Syria from Ceylanpinar on Friday, he said. Some made victory signs, shouted “Allahu akbar” (God is greatest) and waved Syrian rebel flags as they advanced towards Ras al Ain.

“In these moments, Tel Abyad is seeing the most intense battles in three days,” Marvan Qamishlo, a spokesman for the Kurdish-led Syrian Democratic Forces (SDF) said.

SDF forces had recovered a hamlet early in the morning, he said.

The International Rescue Committee aid group said 64,000 people in Syria have fled since the campaign began. Ras al Ain and Darbasiya, some 60 km (37 miles) to the east, were largely deserted.

Turkey’s Defence Ministry said that in overnight operations the Turkish military and its Syrian rebel allies killed 49 Kurdish militants. It says it has killed 277 militants in total.

The ministry said one Turkish soldier was killed in a clash on Thursday during the offensive, which is targeting the SDF, which is led by the Kurdish YPG militia.

Overnight, clashes erupted at different points along the border from Ain Diwar at the Iraqi frontier to Kobani, more than 400 km to the west. Turkish and SDF forces exchanged shelling in Qamishli among other places, the SDF’s Qamishlo said.

“The whole border was on fire,” he said. At least 29 fighters with the SDF and 17 fighters with a Turkish-backed Syrian rebel group had been killed, said the Syrian Observatory for Human Rights, which monitors the war.

In Syria’s al Bab, some 150 km west of the offensive, some 500 Syrian rebels were set to head to Turkey to join the operation, CNN Turk reported. It broadcast video of the rebels performing Muslim prayers in military fatigues, their rifles laid down in front of them, before departing for Turkey.

The Observatory said Turkish forces seized two villages near Ras al Ain and five near Tel Abyad. A Syrian rebel forces spokesman said the towns were surrounded after fighters seized the villages around them.

NATO member Turkey says the operation is necessary for border security against the YPG militia, which it designates a terrorist group because of ties to militants who have waged a decades-old insurgency in southeast Turkey in which more than 40,000 people have been killed.

Ankara has also said it intends to create a “safe zone” for the return of millions of refugees to Syria. The SDF have been the main allies of U.S. forces on the ground in the battle against Islamic State since 2014. They have been holding thousands of captured IS fighters in prisons and tens of thousands of their relatives in detention.

Trump said in a Twitter post on Thursday: “We have one of three choices: Send in thousands of troops and win Militarily, hit Turkey very hard Financially and with Sanctions, or mediate a deal between Turkey and the Kurds!”.

“I hope we can mediate,” Trump said when asked about the options by reporters at the White House.

Without elaborating, he said the United States was “going to possibly do something very, very tough with respect to sanctions and other financial things” against Turkey.

French Foreign Minister Jean-Yves Le Drian has called for an emergency meeting of the coalition of more than 30 countries created to fight Islamic State. France’s European affairs minister said next week’s European Union summit will discuss sanctions on Turkey over its action in Syria.