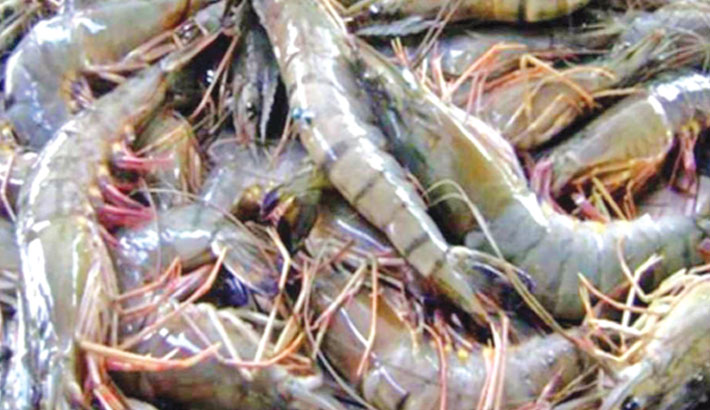 BAGERHAT: ‘Bagda’ shrimp farmers in the district are counting huge losses due to decline in production caused by virus attack and drastic fall in its prices.

Local farmers said a huge quantity of ‘Bagda’ shrimp die in many enclosures in different areas of the district a few months back due to drought and virus attack, leading to the fall in production.

The supply of ‘Bagda’ in local wholesale markets is poor even during the peak season of shrimp while its export accounted for 80 percent of total frozen food export last year, they said, reports UNB.

While visiting Barakpur wholesale fish market in sadar upazila, the UNB correspondent found that ‘Bagda’ variety of shrimp is being sold at relatively lower prices compared to the previous year due to decline in demand and its small size.

Though the prices of ‘Golda’ variety was normal but ‘Bagda’ was selling at Tk 600 to Tk 750 per kg, Tk 300-400 less than the previous year, causing frustration among the shrimp cultivators.

The correspondent found the same scenario at the wholesale fish markets at Foltita in Fakirhat upazila and Foyla Bazar in Rampal upazila.

Asad Ali, a trader of Barakpur fish wholesale market, said, “I have 35 fish enclosures on 150 bighas of land. However, viruses were found in the enclosures during the Bangla months of ‘Chaitra’ and ‘Baishakh’ this year. Within three to four days after the start of virus attack, most of the ‘Bagda’ shrimps died.”

Forty to fifty thousand taka is needed to grow ‘Bagda’ on one bigha of land but these are now being sold only at Tk 25000-30,000, he said adding it would be difficult for them to continue its cultivation in the future without government support.

M Chanchal Sheikh of Sundorghona village of sadar upazila said, “This year I cultivated Bagda shrimp on 10 bighas of land by taking loans of Tk6-7lakh. But all the shrimps died after virus attack. So far, I could not sell a single shrimp.”

“I am cultivating shrimp for the last 20 years. Earlier, I used to make money by growing shrimp, but now I am incurring losses,” said Nasir Sheikh of Badokhali village.

He sought government support for ensuring virus-free shrimp farming and also its increased prices in the international market.

He stressed the need for further exploration of the international market, and providing incentives and loan on soft conditions to Bagda farmers to continue its cultivation.

He said if farmers cultivate shrimp following the scientific method instead of traditional one their production will increase.

According to the Fisheries Department, there are 78709 shrimp enclosures--35704 Bagda and 42975 Galda enclosures—in the district and around 60,000 farmers are involved in shrimp cultivation.