Bala to face copyright violation from the makers of Ujda Chaman 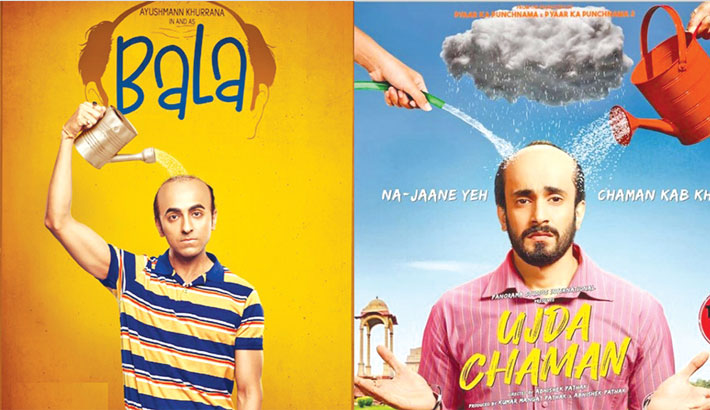 Ayushmann Khurrana and Bhumi Pednekar starrer Bala's trailer was released on October 10, 2019. The trailer left everyone impressed. But after the quirky posters of the movie were out people started comparing it with the poster of Sunny Singh starrer Ujda Chaman.

The trailer of Ujda Chaman was released on October 1st. The makers pitched it as “the first film with a bald protagonist" as it was scheduled to release on November 8th a week before the release of Bala. But yesterday, the makers of Ayushmann starrer movie preponed its release date to November 7th, i.e a week before their original release date, reports Pinkvilla.

Abhishek Pathak, the producer of Ujda Chaman points out that his movie is the official remake of a Kannada film, Ordu Motteya Kathe. In an interview he said that, "I believe good stories need to be seen by maximum number of people. My company Panorama Studios always looks out for such gems. Alone and Drishyam are official remakes by us. We acquired Ondu Motteya Kathe in the last quarter of 2018, with a clear intention to release my version within a year."

He also said that his team suggested November 8 for release and their campaign commenced. In contrast, the Bala team has been changing their release date, from November 22 to November 15 to November 7, which is a day before his film. He think that it will harm both the films and the industry at large.

On planning to take any action, the producer said, "We are discussing it with our legal team and will take action in a few days. This is a clear case of copyright violation." He said that he can understand two films around a bald character releasing within a short span of time, but in this case, there are striking similarities with his film and the original whose rights are with him.

When Mirror spoke to Bala's producer, Dinesh Vijan about these allegation by Abhishek Pathak, his production house Maddock Films said, "Bala has been in the works for several months now as it has been widely reported in the press. The film is very close to our hearts as a project because we want to meaningfully contribute to the conversation on challenging social themes of our times, like the widespread stigmatization of baldness and dark skin. Maddock stands firmly by the originality of its film, and will back it's project all the way, including through legal recourse if need be."

Earlier also on September 14th, filmmaker Praveen Morchhale had filed a case against Maddock Films and writer Niren Bhatt in the Bombay High Court under the copyright Act, 1957. He alleged that the story of Bala sounds similar to the screenplay he had written and narrated to the people in the industry. No injunction has been passed on this matter yet.