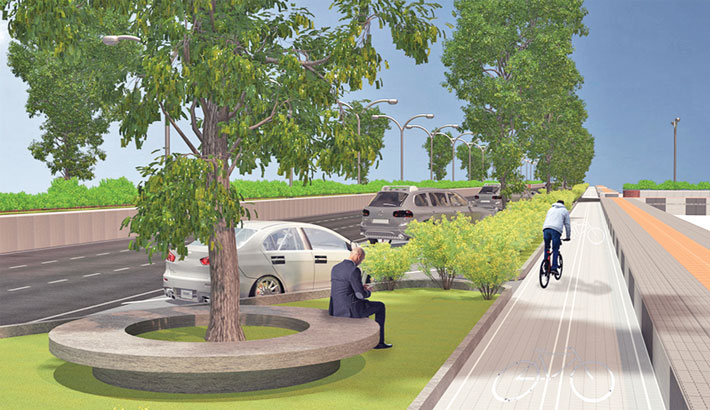 The city dwellers are going to get a maiden bicycle lane, the first of its kind, which is likely to facilitate a seamless riding of the two wheelers.

Dhaka North City Corporation (DNCC) is implementing the project in Agargaon area, a long overdue demand, where the bicyclists will be able to ply across the lane without being obstructed by the fast-moving motor vehicles.

The 285-meter cycle lane on both sides of the roads from Mahabub Morsghed to Election commission office will later be extended.

During a recent visit to the vicinity, it was found that almost all the development work for lane have already been done.

DNCC Zone-5 Executive Engineer Faruk Hasan Md Al Masud said, “We have developed 285 meters bicycle lane from the revenue budget of DNCC. The remaining portion will be implemented under the government funding.”

“We are also developing 180 meters of cycle lane with a six-foot width on both sides of Manik Mia Avenue.”

Basically, 150, 100 and 60 feet roads having street parking and six feet cycle lane  have been developed. As means of commuting, recreation and exercise, it will be a good place for the Agaragon residents, he also said.

Cyclists will be able to use the lane by June 2021, he confirmed.

Welcoming the move, city planner Adil Mohammed Khan said, “As first such initiative, it is commendable since it is our long demand a long cycle lane be built for smooth commuting.” He suggested that such lane should cover a long area of the city as well as those neighborhoods that do not have any alternative transport movement.