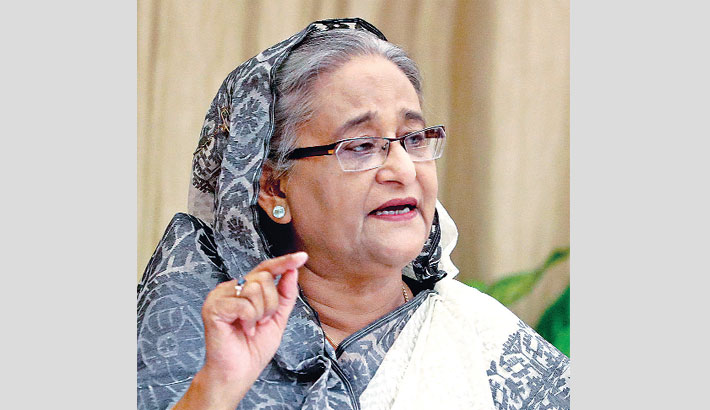 Prime Minister Sheikh Hasina on Wednesday categorically brushed aside the opposition allegations that she was working against the interest of the country.

Bangladesh inked seven deals, including a MoU on withdrawal of 1.82 cusec of water from Feni River by India to ensure safe drinking water for the people of Sabroom town in Tripura state.

Since then, the opposition Bangladesh Nationalist Party (BNP) has been up in arms accusing the government sharing the water of Feni River and exporting LPG at the expense of national interest.

“Those who are making such baseless accusations had once sold the country’s natural gas ahead of the 2001 general elections to go to office. How can they forget their past?” Hasina said.

Mentioning India’s support during the country’s war of independence, the premier said Tripura provided shelter thousands of Bangalis during the war.

Since then, Bangladesh maintains healthy relations with Tripura, she said.

“If Tripura wants something, we should provide them. And we are just providing some water for drinking from a cross-border river,” she said.

Hasina, also the president of the ruling Awami League, came down heavily on BNP for its negligence in serving the country’s interest while in power.

“Neither Ziaur Rahman nor Khaleda Zia raised the disputed issues with India while in power. Even Khaleda Zia forgot to raise the Teesta water sharing issue during her visit to India,” she said.

The premier also bashed the post 1975 successive governments for not carrying out any development work.

“Did they sign the historic land boundary agreement or resolve the maritime boundary dispute?” she posed a question.

Referring to the killing of a Bangladesh University of Engineering and Technology (BUET) student Abrar Farhad, the premier said that offenders, irrespective of party affiliation, would be brought to book as they were nothing but miscreants.

The premier said that she feels the pain of parents who had lost their child.

“I did not get justice of killing of my father and family member. That’s why I feel the pain when people demand justice. They will be tried but why this agitation is continuing after arrest of culprits,” she said and added it was unprecedented that the killers were arrested soon after t immediately.

Terming the boy as brilliant and from an ordinary family, Sheikh Hasina said, “Why he was killed. Why this brutality… why such a heinous act was staged. We are taking action against them.”

The premier also posed a question that why the agitated student confined police while collecting close-circuit footages from the dormitory.

“The question rose in my mind --- why? Are the faces of the killers in the footage? They are staging such actions because their identity will be revealed through the footage?” she asked.

The premier ordered that rooms of all dormitories of every educational institution should be searched by police to stop hooliganism on the campuses.

Over the ongoing drive against corruption and anomalies, the premier said corruption drive would continue across the country.

“There is no specific time or place of conducting drives against the corruption, including casino business. It is an ongoing process in uprooting misdeeds,” she said.

Responding to a question as to why she had to decide on all issues despite having an administration to carry out different responsibilities, Sheikh Hasina said

“I do not understand why such a question has been raised repeatedly. I am the head of the government and I have the responsibility to look into every matter. I do not run the country sleeping like the former premier.”

“As the head of the government, I have to keep a close eye on every issue. No one is pushing me. I do it from my own feelings,” she added.

It is widely said that former premier Khaleda Zia used to sleep at day time and started her day in late afternoon.

“Now it is the duty of the newspaper owners? Owners have to take responsibility for implementing it,” she said adding, “Now the information minister should take action on this. I give him the responsibility.” The premier went to the USA to attend the 74th session of the United Nations General Assembly (UNGA).

During her visit in New York, Sheikh Hasina delivered her speech at the UNGA in Bangla. She exchanged pleasantries with US President Donald Trump and held a meeting with UN Secretary General António Guterres.

After returning home, Sheikh Hasina went to India on a four-day official tour. There she attended the India Economic Summit organised by the World Economic Forum as chief guest on October 4.

She also paid a courtesy call on Indian President Ram Nath Kovind at Rashtrapati Bhawan on the same day.

In the evening, Sheikh Hasina received ‘Tagore Peace Award 2018’ in New Delhi in recognition of her contribution to maintaining regional peace and prosperity.

The Asiatic Society, Kolkata, presented the award to the premier at a function at Taj Hotel.