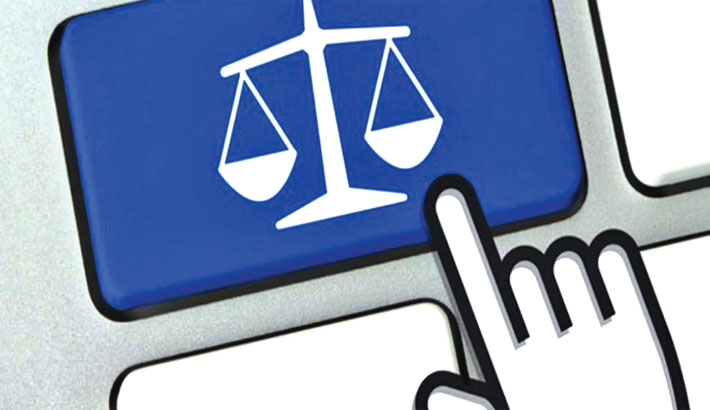 The government has planned to take measures such as increasing the number of judges for fast settlement of the high number of pending cases.

Around 3.6 million cases are pending with the higher and lower courts across Bangladesh, according to latest data.

The government chief emphasised the need for a more secure system using technology, so that high risk convicts don’t need to be frequently brought back and forth from prison to the court.

This will include automation of the administrative system and trial process and establishing of e-courts in order to pave the way for a simple and prompt judicial procedure.

Use of information and communication technology (ICT) in the judicial system to improve the legal services is not new. A close to home example is neighbouring India, which introduced a digitized Judiciary system and aspiring to reduce multi-layer processes that cause delay.

The multi-steps typically include witness hearing and a lot of the time witnesses need to be transported from other parts of the city or different states.

This is time consuming and often costly, with the added dangers associated with moving moving high profile prisoners to and from the court. The process causes delays and consequently increases numbers in pending cases.

A study by Maharastra Judicial Academy stated that the main reason for the delay in disposal of cases is non-production of the accused before the concerned court. There is shortage of manpower of police personnel and transportation to escort the accused.

To make the process faster, video conference facilities were setup across six district courts and two major prison complexes under the guidelines issued by the High Court of Delhi.

A total of 217 courts and 38 jails have been connected across Maharastra to provide speedy trial. Digitization in Judiciary system has also been introduced in Allhabad, Meghalaya, Punjab and Haryana, Telangana and West Bengal.

To run the entire new digitized system efficiently between the High Courts, prison cells and district courts, Logitech BCC950 and Logitech P710e have been used for its high compatibility with multiple platforms.

The law and other bodies used Logitech’s video technology to record live statements and also to upload key evidence quickly.

Incorporating technology in the judiciary has positive impacts. It reduces workload for investigators, police, prison department and judges. It acts as a cost-effective and safe solution for witnesses as they can testify from their location without worrying about security and privacy exposure.