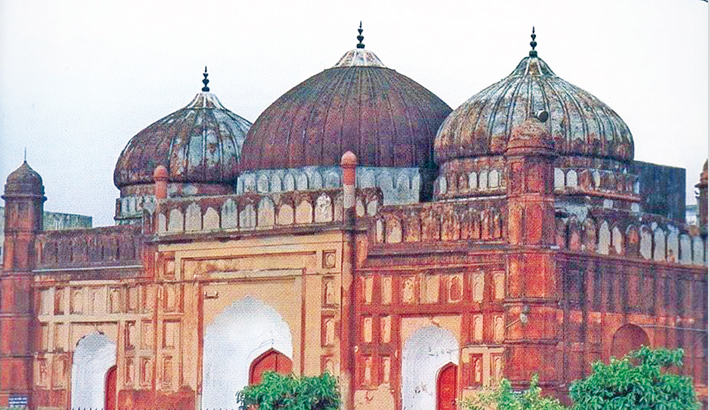 Dhaka, a city with more than 400 years of history, reached its peak during the Mughal period. It is said that Islam Khan founded the city in the year 1610 and made it as the capital of Bengal Subah (Province). The first large scale infrastructural development was most probably initiated by Mir Jumla (1591-1663). He was the Subadar (Governor) from about 1600 till death. He built few forts, bridges and roads, ultimately created a network which was a prerequisite for the smooth movement of troops, equipment and ammunition. Basic utilities for public welfare, strategic purposes and civic amenities were also made present. After his demise, the most famous governor of Bengal, Shaista Khan (died in 1694), came to Dhaka and served from 1664 to 1688. He enthusiastically continued what his predecessor started. Under his rule, the city of Dhaka and Mughal power in the province achieved its greatest heights. Only handful of them are briefly described in this article.

In the Atishkhana mahalla of Lalbagh area, on the west of the Lalbagh fort, lies a magnificent mosque, which is renowned as the Khan Mohammad Mridha’s Mosque. The mosque is on a 5 meter high platform having an area of around 1,400 square meter (sq. m.). The platform itself consists few vaulted rooms with columns. The mosque in the north-west side of the platform and has an area of approximately 1,200 sq. m. The mosque was built in 1704-1705 by Khan Mohammad Mridha, who was the main Kazi (magistrate or judge) of Dhaka city. It has three domes and four turrets with ribbed cupola. There are three entrances on the eastern wall and one each on south and north. All of them have minarets beside them. There is also a separate building with three rooms on the same platform, which might have been used as madrasa. The structure is in pristine condition and and been restored by the Department of Archaeology, Bangladesh.

It used to be one of the most beautiful mosques of Dhaka for last few centuries. Back then the river flowed just beside the building and in the wet season it looked like a white bird on water with it’s white color. It was such a darling, that two verandas, an unique feature for a mosque was added in the structure to watch the river flow. As per the name, the mosque has seven domes and the rectangular structure takes up almost 140 sq. m. area. There are three main domes, and instead of four turrets in the corners, there are four hollow towers with domes on top of them, which makes up total seven domes. From the style and architecture of the building, experts assume that it was constructed probably in 1680s, during Shaista Khan’s reign in Bengal. Ite has three doors in the east wall and three well-decorated mihrabs on the west wall. The building is wonderfully decorated with finials. There is a gate for the mosque complex, which is actually newly built. The main structure lies after the gate, crossing an almost 30 meter long plaza which also incorporated a garden.

The mosque is situated to the west and quite close to the famous Mausoleum of Pari Bibi, inside the Lalbagh Fort complex. It is said that the mosque was built by Shahzada Azam (1653–1707), while he was staying at Dhaka (1678-1679). The plaque inside the mosque states it was constructed during 1664-1665, which information is more reliable. Probably the mosque was built by subadar Shaista Khan along with the fort as the subadar of Bengal (1664 – 1688). The rectangular mosque is in north-south direction with a dimension of about 20 meters by 10 meters. It has three domes, where the central one is bigger than the others and four octagonal turrets in each corners. The inside of the mosque is divided into equal three parts with three mihrabs. The mosque is very well preserved and one of the main attractions of the fort complex.

The mosque is located at the south of the Southern Gate of the Lalbagh fort. It was built by Prince Farrukhsiyar (1683-1719; reign: 1713-1719), who stayed in Dhaka from 1703 to 1706. He was acting as a representative of his father, Prince Azim-ush-Shan then. It is one of the largest mosques in Dhaka. The mosque had a wooden roof which eventually collapsed. Nawab Abdul Ghani (1813–1896) constructed the masonry roof in the 1870s. A new minar was also added in the 1950s. At present the mosque has been renovated extensively and the old basic structure has been lost, though the mosque was never very decorative. It is now multistoried structure and mostly known as the Lalbagh Shahi Mosque to the younger generation.

On the east of Chawkbazar and northern side of Moulavibazar in the old town, at the intersection of Begum Bazar, is the above mentioned mosque. The huge rectangular mosque sits on a quite high platform, which actually accommodates few shops. It has 5 entrances on the eastern side with a stair. All the entrances have minarets. Along with turrets in all corners, it has five domes. There are five mehrabs on the west wall. The mosque was built by Murshid Quli Khan (1660-1727) when he stayed in Dhaka (1700-1704) as Diwan. He was known as Kartalab Khan then, which is the reason behind naming of the mosque.

There is an interesting building adjacent to the mosque, which can also be termed as an extension. It is shaped as the traditional Do-chala houses of bengal, though it is a brick structure with a permanent roof. It may been used a residence for the Imam.

Dhaka is not only a city of Rickshaws but also a city of mosques. Wherever Mughals went, they adorned their cities with beautiful lawn, chawks (plaza), forts, palaces and mosques. East Bengal came under proper Mughal rule in the 17th century, quite late than northern India. Despite that, there are numerous Mughal mosques in Dhaka, as it was the capital of Subah (province) of Bengal. Few are lost but most of them survived the test of time and weathering. These remaining structures provide us glimpses of the Mughal Dhaka.

This article was first published in the