A close look at three smartphones 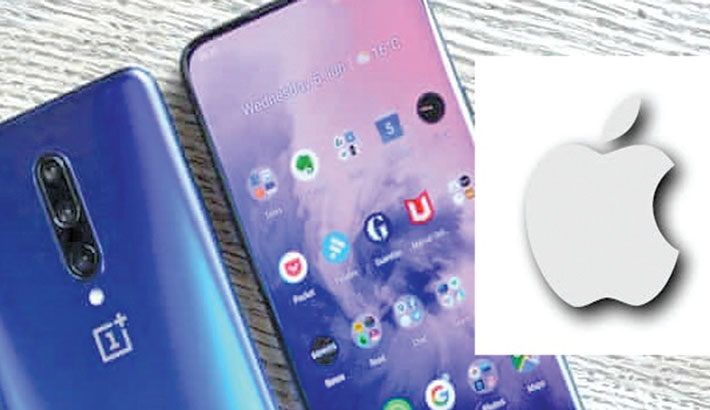 Need a new smartphone but don’t know which one is the very best? Here’s a guide comparing the current top-end smartphones from Apple, Samsung, and OnePlus and others to help you pick the best handset for you according the Guardian review.

This Guardian buyer’s guide to top-end smartphones was last updated on 23 July 2019, and represents the best available models at the time. As new models are released and tested, this guide will be updated to help you choose the right flagship phone for you.

The latest superphone undercuts the competition on price while offering a better experience in almost every meaningful way. The OnePlus 7 Pro is the firm’s biggest yet with a monster 6.67in QHD+ AMOLED screen, which is arguably the best on any phone. It runs at a refresh rate of 90Hz – compared with 60Hz for the competition – which makes everything from scrolling through lists to smashing through games super slick.

The screen is edge-to-edge in every direction too, lacking any intrusions by the notches plaguing rivals as the selfie camera has been moved to a motorised module that pops out of the top of the phone when needed.

Speed is the name of the game. The OnePlus 7 Pro is the fastest-feeling smartphone by miles. Part of that is the firm’s excellent version of Android 9 Pie called OxygenOS, which is on-par with Google’s on the Pixels, and the other is the top-of-the-line hardware.

It has Qualcomm’s latest Snapdragon 855 processor, at least 6GB of RAM and 128GB of storage. But that storage is also much faster than rivals using the new UFS3.0 standard, and the difference in day-to-day usage is palpable

Even the optical in-display fingerprint scanner is the best in the business, beating that on the Huawei P30 Pro and matching traditional capacitive sensors for speed.

The triple camera system on the back matches rivals combining a 48MP main, a 16MP ultra-wide angle and an 8MP telephoto camera. It can’t beat the P30 Pro, but it matches or beats the rest on detail and utility.

Battery life is good, but not Huawei-beating. It charges really fast using OnePlus’s WarpCharge system, but there’s no wireless charging, which is a shame. It is water resistant to some extent, but doesn’t have an IP rating. It has dual-sim support in most markets too.

The best iPhone is not the biggest or most expensive. The iPhone XS combines a stunning, good-size 5.8in screen, svelte body and top-notch performance into the most appealing package from Apple to date.

Apple’s Face ID is the best face recognition system in the business, the dual-camera system on the back is excellent, as is the performance of the A12 Bionic processor and the class-leading gesture navigation system of iOS, which has replaced the home button of iPhones of yore.

You’re also in line for about five years of software updates, which is likely at least two more than any other brand of phone. The iPhone XS is a metal and glass sandwich, and will smash just like the competition when dropped, but the stainless steel sides and glass back exude a luxury feel not matched by other phones. Sadly most will put it in a case.

The biggest downsides are the price, which at £1,000 is likely significantly more than the competition, and battery life, which only manages about a day of medium usage. The iPhone XS has wireless charging and supports fast charging via a USB-C to Lightning cable, but only ships with a slow charger in the box. Its cellular modem performance is also not as good as competitors, struggling more to keep a working 4G data connection in congested areas, particularly compared with the Mate 20 Pro.

If you want the sweet-spot between a big, stunning screen and smaller phone size that’s easier to handle and fit in a pocket, that’s the Galaxy S10.

The 6.1in QHD+ AMOLED screen with a small hole-punch notch in the top right is one of the very best on the market and is big enough to make the most of apps and movies look great.

Small bezels all round make the phone pretty compact compared to rivals, and it’s light too. It’s still a glass and metal sandwich, which means you might need a case to protect against falls.

The ultrasonic fingerprint sensor mounted under the display works well, although it’s no longer the fastest on the market.

Samsung’s new One UI software, based on Android 9 Pie, is a big leap in making large phone easier to use, putting things you have to touch toward the bottom of the screen and information towards the top. Samsung also gives you the choice of traditional navigation keys or swipe gestures.

You should see around three-years of software support from Samsung, although the company is often slow to deliver big Android version updates.

The rear triple camera is one of the best allowing you to zoom from 0.5 through 2x, and on to a 10x hybrid zoom. It won’t beat the Huawei P30 Pro, but it keeps up with rest. The selfie camera pokes straight though the screen and is one of the best on the market.

Performance is good, but battery life is the S10’s one weakness. It will last a day of usage but not much more. There’s both cable and fast wireless charging to top up during the day and the wireless power share feature turns the phone into an ad-hoc wireless charger for other devices.