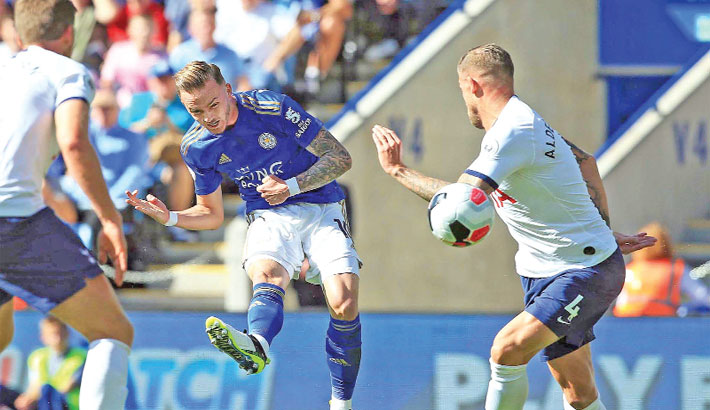 Tottenham’s long wait for an away win in the Premier League continued as Leicester came from behind to beat last season’s Champions League finalists 2-1 at the King Power on Saturday.

However, the goal was ruled out by the finest of margins for offside after a VAR review and Leicester compounded Spurs’ pain by equalising two minutes later through Ricardo Pereira.

James Maddison’s fine long-range strike five minutes from time then capped Leicester’s comeback as they moved above Manchester City into second in the Premier League, for a few hours at least.

By contrast, Spurs have now won just two of their first seven games of the season in all competitions and have still not won away from home in the Premier League since January.

Leicester are aiming to break the glass ceiling of the Premier League top six for the first time since their sensational title triumph in 2016.

And Brendan Rodgers’s men claimed their first big-six scalp of the season after drawing away to Chelsea and running Manchester United close at Old Trafford last weekend.

The Foxes started brightly as Maddison curled just wide and then forced Spurs’ stand-in goalkeeper Paulo Gazzaniga into a smart save at his near post.

The hosts were also first to have the ball in the net when Gazzaniga — deputising for the injured Hugo Lloris — spilled Youri Tielemans’s shot and Wilfred Ndidi bundled home the rebound.

But replays showed Ayoze Perez was offside as he reached the loose ball off Gazzaniga first and the goal was ruled out after a VAR review.

Handed that reprieve, Tottenham went in front in unusual fashion on 29 minutes when Son Heung min’s backheel found Kane, who stumbled and hit the floor as he bore down on goal.