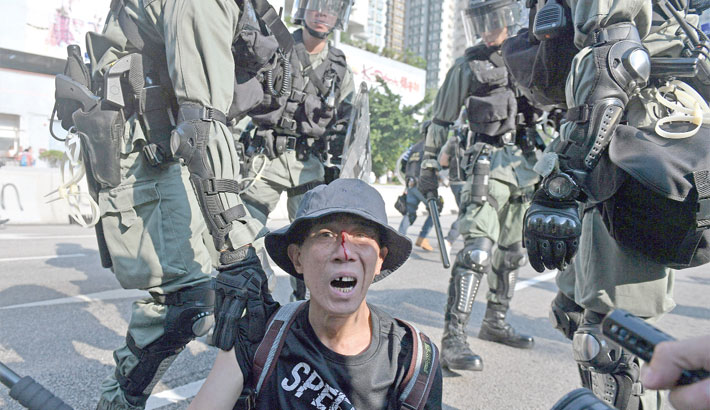 A pro-democracy protester reacts while blood streams from his face, as police (background) look on in Hong Kong’s Tuen Mun district on Saturday. - AFP PHOTO

HONG KONG: Riot police and protesters in Hong Kong fought brief skirmishes near the Chinese border on Saturday, the latest clashes during huge pro-democracy protests that have battered the financial hub for more than three months, reports AFP.

Police fired tear gas and rubber bullets at small groups of hardcore activists who had built barricades in the outlying town of Tuen Mun, some of them lobbing bricks and at least one Molotov cocktail.

Multiple protesters were seen being arrested in the clashes, which were less sustained than the intense battles of previous weekends.

The city has been convulsed by months of huge, sometimes violent rallies calling for greater democratic freedoms and police accountability.

The movement is the biggest challenge to China’s rule since Hong Kong was handed back by Britain in 1997 and shows no sign of ending, with city leaders and Beijing taking a hard line. Saturday’s clashes were the 16th straight weekend of protests and skirmishes.

In a now familiar pattern, the day began with a peaceful rally through Tuen Mun, a town in Hong Kong’s northwest, close to the border with mainland China.

At one point, a handful of protesters pulled down China’s flag flying outside a local government office and burned it.

Tensions soon spiked after police snatch squads rushed into a park where crowds had gathered and made a series of arrests.

Hundreds of hardcore activists then built barricades and dismantled nearby fences to arm themselves with makeshift clubs. Objects were also thrown onto nearby train tracks.

But protesters showed little appetite in holding ground, quickly retreating as soon as tear gas and rubber bullets were fired by police.

By Saturday evening, pockets of demonstrators and police were playing a familiar game of cat and mouse.

Calvin Tan, 22, was among those taking part in the rally earlier in the day. He said most protesters were prepared for a “long term fight”.

“Every small protest matters, even though it doesn’t seem to help that much, it’s like each small step in a marathon,” he told AFP.

Tan described himself as a moderate who avoids clashes with police. But he said he ideologically supports those on the frontlines.

“When facing institutional violence, we have no choice but to respond with street fights,” he said. “We have tried peaceful, rational and non-violent methods and continued using these ways to fight for our demands.”

Hong Kong has been plunged into crisis this summer. The protests were ignited by a now scrapped plan to allow extraditions to the authoritarian Chinese mainland.

But when local leaders and Beijing refused to budge it snowballed into a wider campaign for democracy, fuelled by animosity towards the police.

Protesters have hurled rocks, bottles and petrol bombs as well as used slingshots in their battles with police, who have responded with tear gas, rubber bullets and water cannons with growing frequency.

But the city’s force reject such criticism, saying their officers have used proportionate force against hardcore protesters who are showing increasing levels of violence.

At a briefing with foreign journalists on Friday, a senior commanding officer said he was alarmed by the latest tactics from protesters.

“Our officers are worried that... violence has got to such a level that they might have to kill someone or be killed themselves,” he said, speaking on condition of anonymity.