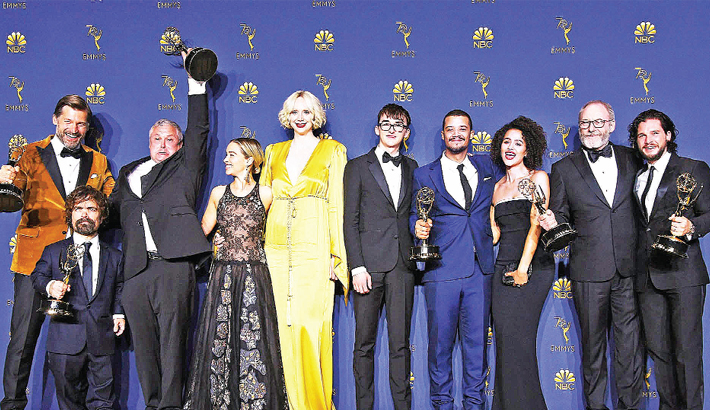 Game of Thrones will seek to make Emmy history one final time Sunday when television’s best and brightest gather at a glamorous ceremony in Los Angeles to bid farewell to a number of long-running hit shows, report agencies.

Despite its misfiring finale which divided fans, the fantasy epic about feuding families and flame-shooting dragons secured a whopping 32 nominations for this year’s Emmys — television’s version of the Oscars.

The most decorated fictional show in Emmys history, “Thrones” has twice won 12 awards in a single season.

It is well on its way to besting that record this year, with 10 awards already bagged in lesser categories at last week’s Creative Arts Emmys, including for the show’s blockbuster special effects and mock-medieval swords-and-bodices costumes. It is the overwhelming favorite to add the top drama series prize to its haul on Sunday. The Television Academy’s 24,000-plus voters had two weeks in August to pick their favorites.

Thrones was not just a critical hit but a sweeping cultural phenomenon — more than 40 million tuned in to watch each episode of the final season.

Emmys organizers, who have copied the Oscars by eschewing a host this year, will hope that such wild popularity lifts the ceremony’s viewing figures.

All 10 Thrones acting nominees will serve as guest presenters — as will the likes of Gwyneth Paltrow, Ben Stiller and the Kardashians. Amazon’s The Marvelous Mrs Maisel and HBO’s Chernobyl have also emerged as powerhouse contenders.

Another long-running popular show taking its final Emmys bow is The Big Bang Theory, the throwback sitcom about a group of geeky, young California scientists. It earned only one nomination — for directing — but its creators are unlikely to mind after all 12 seasons were purchased by HBO Max streaming service this week for a reported $500 million.

In the limited series categories, “Chernobyl,” HBO’s drama about the 1986 nuclear disaster, won seven technical Emmys last weekend. It even inflicted a rare defeat on “Thrones” in production design. But it may struggle to add to that tally on Sunday, when it competes with Netflix’s “When They See Us,” the searing true story of five men wrongly accused of raping a Central Park jogger, which has eight acting nominations.