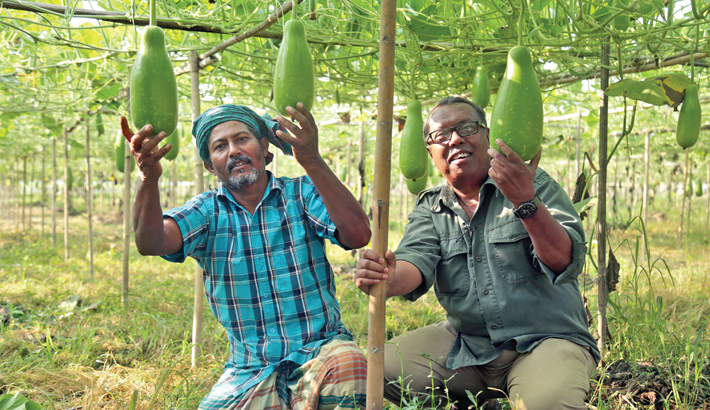 Bangladesh’s agriculture sector is going through a transition and it was time for the educated youths to engage themselves in the sector to bring innovation and boost productivity.

“Modern technology is replacing traditional farming methods. This is where the educated youths can lead the transformation and pioneer the change,” said Shykh Seraj, an eminent media personality and agriculture development activist, in an interview with the Daily Sun.

There will be a time when only the educated agriculturists would be able to compete at a global level to sustain the country’s food sufficiency and agricultural productivity, he said.

He also observed that the country’s agriculture sector has already seen technological development—- not only in terms of adopting new machinery but also in terms of introducing hybrid seeds and crop diversification. “Huge developments have taken place in fisheries, livestock, poultry and all other agricultural sectors.”

“We have seen surplus productions of many agricultural products. In the recent time during Eid-ul-Azha, the country has seen surplus cattle production to meet the demand of sacrificial animal,” Shykh Seraj said.

Around 1, 17, 88,563 cattle have been raised in the country this year against the demand of 1, 1,000,000 sacrificial animals, he noted, attributing the success to the adaptation of new technology.

A mixed of ICT, IoT, artificial intelligence and other mixed of new technology has been introduced in the agriculture sector to transform the sector, he said.

IoT smart farming solutions is a system that is built for monitoring the crop field with the help of sensors (light, humidity, temperature, soil moisture, crop health, etc.) and automating the irrigation system.

Shykh Seraj said the transition in the agricultural sector would bring about two different outcomes.

One outcome is that business groups will start investing in the agriculture sector, promoting value addition. Farmers producing milk will no longer have to sell raw milk, but they will have the option to produce and export dairy products, he explained.

Fruit will be exported after processing and many industrialists will be investing in this promising sector, he added.

The agriculture development activist, however, said the rural farmers who produce rice, jute and vegetables might not get the benefits of such changes.

Agriculture will be commercialised and the farmers will not be benefited much by producing rice and regular agricultural products. They have to produce high-value crops, he said.

“But the core farmers cannot take part in this due to lack of capacity in a changing scenario. Automatically that’s the group of farmers who will be affected. The transition of agriculture has both good and bad outcomes,” Shykh Seraj noted.

He said the opportunity will not be there for long—-those who can’t adapt to this will fall behind.

The progressive farmers will get security, banks will give them loans with the transitions. Due to ICT and IoT, they can know that their loan will be returned as they will get the updated data.

A database could be kept for the farming and insurance coverage of the crops, which will also give advantage to those who want to borrow from banks.

Shykh Seraj thinks that there are many reasons for not getting fair prices of agricultural products. One of these is a lack of understanding and data about the actual need for a specific crop in the country. “No one can give you an accurate figure on the demand for potatoes in Bangladesh.”

He said when production of a crop is higher against the demand, the price automatically falls.

“Farmers are not getting fair price of their crops often even if the production is lower than the demand due to lack of access to the market,” he said, adding that there is no policy support for this while the government needs to fix the price of some agricultural products through price commission.

Community exchange and future sale is very important in agriculture but we don’t have for this farmer had to fall prey of local brokers, he added.

Shykh Seraj said the government should impose duty on import of crops during harvesting time of the same crop to safeguard the local farmers.

Talking about the future of the agriculture sector, he said the sector is expanding fast.

“Huge investment will pour into the sector and food business is the next big thing,” he said.

Dragon fruit can be harvested in six months and the land sits idle for the next six months but using modern technology people are producing dragon fruit round the year through the use of LED grow lights.

Farmer’s socio-economic conditions have improved over the past 47-48, he said.

He also received the highest award for agricultural journalism from the United Nations, FAO A.H. Boerma Award, Gusi Peace Prize (Philippines) and many other prestigious accolades at home and abroad.