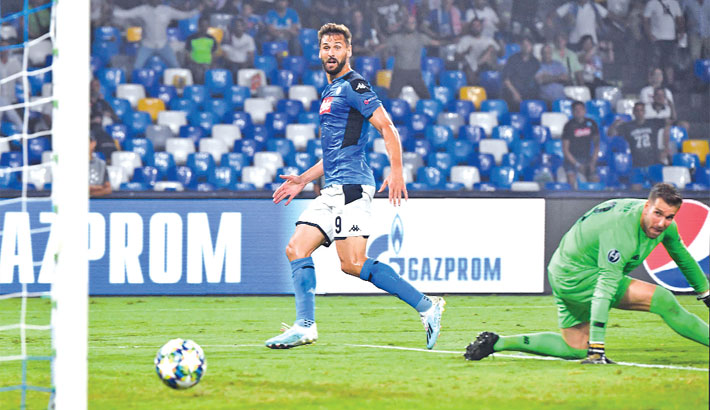 Dries Mertens and Fernando Llorente scored late as holders Liverpool fell 2-0 at Napoli in the opening match of their Champions League title defence on Tuesday.

Mertens converted a penalty on 82 minutes and Llorente added a second in stoppage time as Napoli gained a measure of revenge for last season’s 1-0 defeat at Anfield that denied the Italians a spot in the knockout rounds.

The loss for Jurgen Klopp’s side makes them first reigning European champions to lose their opening game of the following campaign since AC Milan in 1994.

However Liverpool, who sit top of the Premier League after five straight wins, remain favourites alongside Napoli to progress from Group E despite Salzburg’s thrilling 6-2 win over Genk.

“Give us a few more games to change the table, but it looks like Napoli are through,” said Klopp, who tipped the Italians to go far.

“Napoli can win the competition. If you have a good plan and good players, you don’t have to be the best team in the world to win the Champions League. You have to perform at the right moment.”

Liverpool also lost their group-stage match in Naples last season before going on to lift a sixth European Cup.

Goalscorer Llorente joined Napoli this season after playing his last game for former club Tottenham in the Champions League final defeat to Liverpool in Madrid in June.

He came on as a substitute and pounced on a rare Virgil van Dijk blunder after Mertens had opened the scoring from the spot to cause pandemonium among the crowd at the fiery Stadio San Paolo.

After two difficult opening matches in Serie A with seven goals conceded, Ancelotti’s side seem to have clicked into gear.

Fabian Ruiz was twice denied early by Liverpool goalkeeper Adrian, who also pulled off an impressive one-handed save on Mertens after 49 minutes.

For Liverpool, Salah and Mane had threatened before Firmino missed a chance to open the scoring just before half-time when his header flashed wide and Napoli goalkeeper Alex Meret’s fingertip save at full stretch denied Salah on 65 minutes.

The breakthrough came eight minutes from time after Jose Callejon went down easily in the box under pressure from Andy Robertson, with Mertens slotting in the penalty, awarded without consultation of VAR.

Llorente then pounced on Van Dijk’s loose pass to claim his first Napoli goal, sealing a famous win for the hosts.