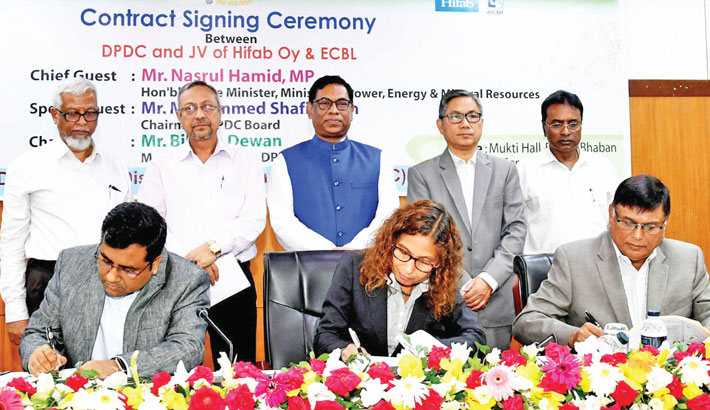 Dhaka Electricity Distribution Company (DPDC) on Wednesday signed an agreement with a consultant firm for a project for supplying uninterrupted electricity in the Dhaka city.

“The project will help will to ensure uninterrupted electricity city supply in the capital city. Once the project is implemented then scenario of Dhaka city will be changed,” he said.

Nasrul said the project finance by Chinese government will be implemented under Government to Government method considering very important project.

He also directed two managing directors of power distribution companies in Dhaka city for holding talks with authorities concerned of internet and dish line within next month.

“As soon as possible all hanging cables attached with power lines will be removed,” the state minister said adding that substations will be erected to make it secured alongside to give the look neat and clean. Managing Director of DPDC Engineer Bikash Dewan said the initiative was taken to strengthen Dhaka’s power distribution system with the help of China.

The appointment of consultant was very important for implementation of the project-Expansion and Strengthening of Power System Network under DPDC area,” he said.

According to the project details, Chinese contactor- Tebian Electric Apparatus-will implement the project at a cost of Taka 20,468 crore, of which Bangladesh government will give Taka 7,441 crore, DPDC will give Taka 1,249 crore, while China will provide Taka 11,777 crore.

DPDC secretary Asaduzzaman and regional director of Hifab Nathalie Tranfeld signed the contract on behalf of their respective sides.