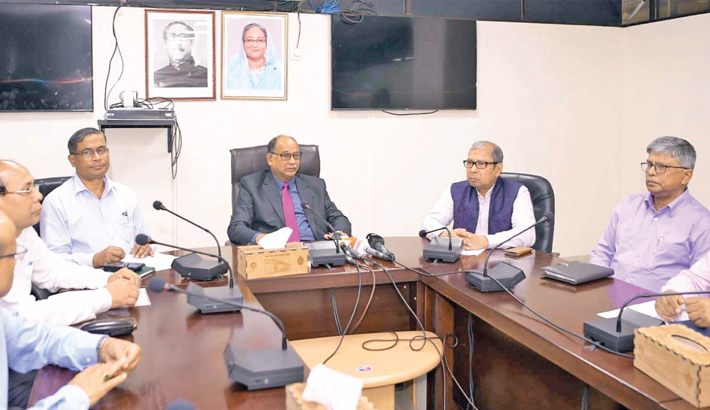 Railways Minister Md Nurul Islam Sujan briefs journalists on his recent visit to India and China at the conference room of Railway Bhaban in the city on Tuesday. —SUN photo

“Indian government will give those locomotives to Bangladesh as a sign of friendship between two neighboring countries,” he said.

The minister said this while addressing a press briefing at Railway Bhaban in the capital. Sujan said Indian government will hand over the locomotives in the first week of October during Prime Minister Sheikh Hasina’s visit to India.

“We have scarcity of locomotives. That’s why we took initiative to buy locomotives from India which is scheduled to reach in 2022. But, we want few locomotives on fare basis from India to mitigate the ongoing crisis,” he said.

“They will provide 10 locomotives for meter gauge and 10 for broad gauge,” he added. The minister further said that they have 233 locomotives, of them 68 percent are outdated. Sujan said Maitree trains will ply Dhaka-Kolkata route six times in a week instead of four times. Kolkata-bound Bandhan express from Khulna will increase it’s trip soon.

He said the government is working to open a portion of the rail route from Dhaka to Jashore through Padma bridge at the time of inauguration of the bridge in June, 2021.

The construction work of the rail route started in July 2018 and is scheduled to be completed by December 2024.

They are working on priority basis to open the 42-kilometre section of the route -- Mawa to Bhanga -- to meet the deadline, the minister said.