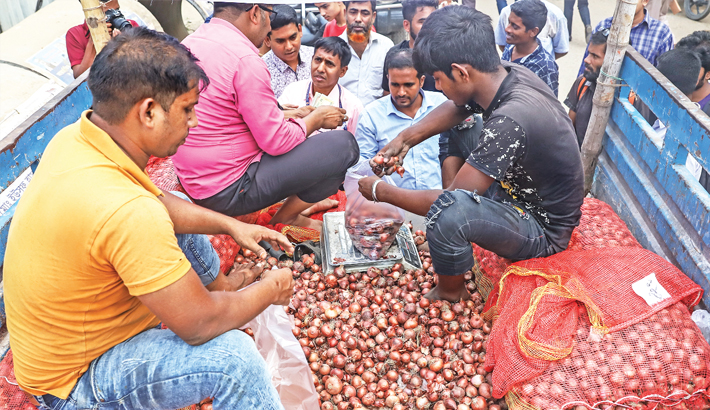 Onions are now available on the open market in the wake of hike in price of the essential item. Trading Corporation of Bangladesh started selling onions in the capital on Tuesday. The photo was taken near the Secretariat of the city. - SUN PHOTO

Onion prices are likely to come down within 24 hours.

Dr Md Jafar Uddin, secretary, Ministry of Commerce, and Abu Raihan Alberuni, member (trade policy department) of Tariff Commission, have expressed the optimism at a meeting with several stakeholders at the Ministry of Commerce in the capital on Tuesday.

Abu Raihan Alberuni said, “We’re confident enough that the prices of onions would come down after this meeting. We want positive help from journalists.”

He, however, did not explain what steps have been taken in this regard.

The commerce secretary said the skyrocketing price of onion won’t continue after this meeting following tightening of market monitoring.

“If needed, we’ll sit again after 2-3 days. We’ve also discussed about import of onions from Myanmar or other countries,” he said.

Onion prices surged overnight after traders hiked rates in the wake of restrictions imposed by India on shipments of tubers to other countries to contain its domestic prices.

The Indian authorities slapped $850 (Tk 71,821) as minimum export price for per tonne of onion on September 13, a move that made onion market highly volatile here as Bangladesh meets a portion of its annual demand for the key cooking ingredient through imports for inadequate domestic production.