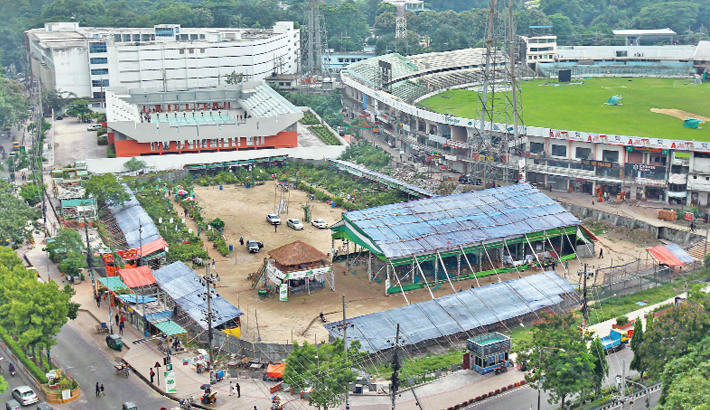 A swimming complex is being constructed at a portion of the ‘Outer Stadium’ while a ‘green fair’ is underway on the other parts. Occupying the open space for various purposes is hampering mental and physical growth of children in the port city. —sun photo

The number of open spaces as well as playgrounds is decreasing rapidly in the port city due to uncontrolled and unplanned urbanisation.

Though population of the second largest city of the country is increasing sharply, the lack of sufficient open space hampers the normal mental and physical growth of the children, experts said.

The Chattogram Development Authority (CDA) formed master-plan in 1995 aiming at ensuring ten per cent open spaces in the city for the city dwellers.

There were sufficient playgrounds and open spaces during forming the master-plan.

Now Chattogram has two international stadiums and those are accessible for limited number of players.

But, the children require normal playgrounds for recreations and growths in every area of the city.

Besides, most of the available playgrounds in the city are unsuitable for playing and walking. Those remain occupied for holding fairs and meetings or with construction materials.

The experts observed that the crisis of playground is ultimately harming the young generations as they are getting involved and addicted to gang culture, drug and social media due to lack of space for outdoor games.

A total of eight teenagers were killed and many injured following practice of gang cultures in the city over the last couple of years, sources said.

Chattogram Metropolitan Police (CMP) prepared a list of 250 teenagers and their ‘big brothers’ to check criminal activities by the under-aged children.

Agrabad Women College former Principal Dr Anwara Alam said current generations have been passing a crucial time as they are addicted to technologies along with the extra burden of study.

“The concerned authorities and policymakers will have to consider future of our children by developing and renovating the playgrounds to ensure sufficient space for their enjoyment,” she said.

Anwara also stressed for not allowing any educational institutions without playground.

Currently, there are a few playgrounds in the city which cannot ensure the sport activities for the children.

Those are not open or free and have timetable to use them, said the sources.

Mainly, there are two big fields ‘Outer Stadium’ and ‘Parade Field’ where children can play without any bar.

But, the Outer Stadium lost around one-third of it for Swimming Complex and the rest parts remain busy for truck parking and fairs.

Now, the scope is rare to get environment to become a player of national standard.

“We request the concerned authority to repair the existing fields and take initiatives to construct some new fields in the city to ensure the environment for outdoor games,” he said.

Chattogram City Corporation (CCC) Mayor and Chattogram Jela Krira Songstha (CJKS) General Secretary AJM Nasir Uddin told the daily sun that they will renovate the Outer Stadium for sports and walking after ending of the ongoing ‘Green Fair’ and have plan to construct a stadium in Bakalia area.

“There are still some playgrounds occupied by various educational institutions and government departments in the city. I requested the authorities to take care of their fields for sports and stop allowing commercial uses,” he said.

“Government should raise or keep reserve funds to construct new playgrounds,” he said.