PM directs govt employees to use Biman for air trips 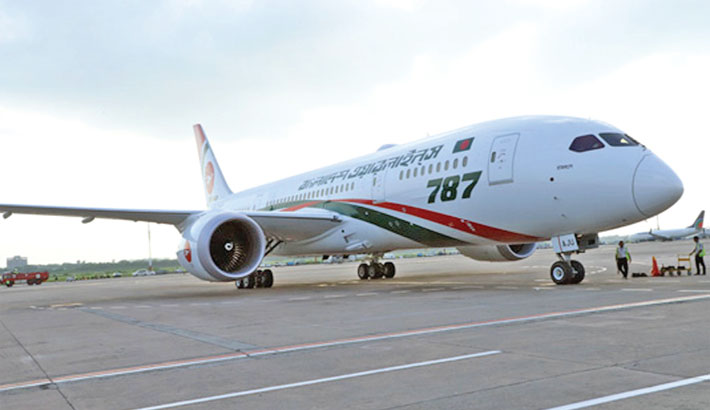 “We feel proud while boarding on Biman. I have taken a decision that government employees must avail the Biman flights,” she said while inaugurating the ‘Rajhangsa’, the 4th Dreamliner of Biman Bangladesh Airlines.

“I have named the Dreamliners in Bengali words so that all can familiar with the Bengali culture,” she said, asking the authorities concerned of the national flag carrier to work with honesty and sincerity to ensure the quality services to the passengers.

“Apart from the existing aircraft, three Dash Bombardier planes will be added to the Biman fleet. We have also news that Boeing is interested to sell its two aircraft soon, the order of which has been canceled earlier… we will take this opportunity,” she said.

The premier formally commissioned the newly-procured state-of-the-art aircraft of the national flag carrier at the VVIP Tarmac of Hazrat Shahjalal International Airport in the capital.

After the inauguration, Sheikh Hasina boarded the aircraft, inspected its inside and talked to the pilots and the crew members.

The fourth Boeing 787-8 Dreamliner, the 16th aircraft of the national flag carrier, was added to the Biman’s fleet on September 14. It landed at HSIA directly from the USA’s Seattle’s Boeing Factory on the day.

Biman’s acting Managing Director and CEO Captain Farhat Hasan Jamil along with other high officials received the Dreamliner at the airport after welcoming it with a water cannon salute.

Earlier, the first and second Boeing 787-8 Dreamliners, named as ‘Akash Beena’ and ‘Hangsabalaka’ respectively, arrived here in August and December last year, while the third one known as ‘Gaangchil’ landed in July last. The prime minister named all the Dreamliners, Biman sources said.

In 2008, Biman Bangladesh Airlines signed a US$2.1 billion agreement with Boeing to purchase 10 new aircraft. As per the deal, Boeing has already delivered all the aircraft – four 777-300ER’s, two 737-800’s and four Dreamliners – to Biman.

Rajhangsa, the 271-seat Boeing 787-8, has been designed as 20 percent fuel efficient carrier compared to the other aircraft. The airliner has the capacity to fly 16 hours nonstop with an average speed of 650 miles per hour.

It will provide its passengers with WiFi services at a height of 43,000 feet, allowing passengers to browse the internet or connect with their friends and family from any place of the world.