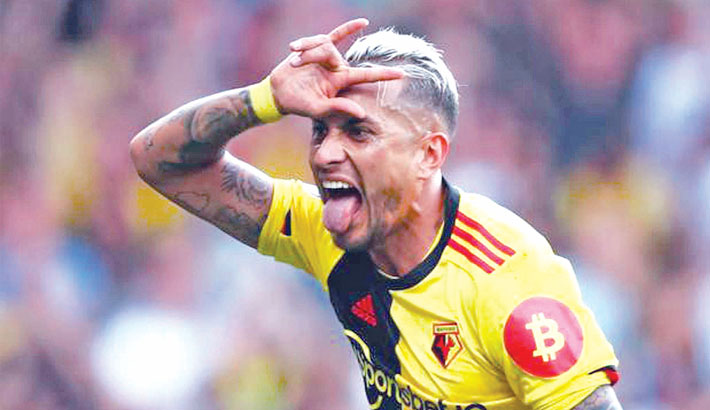 Watford forward Roberto Pereyra celebrates after scoring a goal during their English Premier League match against Arsenal on Sunday. The match ended with a 2-2 goal draw.

Quique Sánchez Flores had missed all of this – the thrills, the spills and the very peculiar madness that can turn Premier League football matches into the most gripping of spectacles, reports The Guardian.

The returning Watford manager watched his team lose their grip in the first half and Pierre-Emerick Aubameyang mete out the punishment with a pair of trademark finishes. The Arsenal striker now has five goals in five matches this season and his complete record at the London club bears consideration – he has 45 in 70 appearances across all competitions.

Game over? Not at all. Not when Arsenal continue to treat the notion of defending properly with such disdain. Unai Emery’s team were the architects of their own downfall and their only fortune was that Watford did not depart with all three points.

Watford had the chances during a breathless finale when the outstanding Gerard Deulofeu fired inches off target and Tom Cleverley saw a shot deflect wide off David Luiz before, at the very last, Abdoulaye Doucouré blew a gilt-edged opportunity, shooting too close to Bernd Leno.

Arsenal’s fixation with playing short passes out from the back on goal-kicks had led to a couple of flutters, serving to transfer the momentum to Watford and, when they got it horribly wrong on 53 minutes, it provided the home team with a route back into the game.

Leno played a deadball square to Sokratis Papastathopoulos on the corner of the six-yard box but, when he looked for Mattéo Guendouzi, Deulofeu stuck out a boot and diverted it to Cleverley. The midfielder banged home a low shot.

Emery had switched from his midfield diamond to a 4-2-3-1 formation in an attempt to close out the final 20 minutes or so and there was something darkly comic about how his team were undone on the break for the equaliser.

Nicolas Pépé had been denied by Ben Foster but when Watford countered, Arsenal were exposed. More specifically, David Luiz was exposed. The Watford substitute, Roberto Pereyra, ran at him and, when David Luiz retreated, he entered his own area. Then, he hung out a leg at Pereyra and watched him tumble. It was a clear penalty.

Pereyra picked himself up to score and, although it should have been more in the end, Flores could enjoy a tangible reward from his first match back at the club that he managed in the 2015-16 season. One thing was plain. If Watford continue to play with such energy and character, they will soon rise from the foot of the division.