We failed to grab our chances, says Shakib 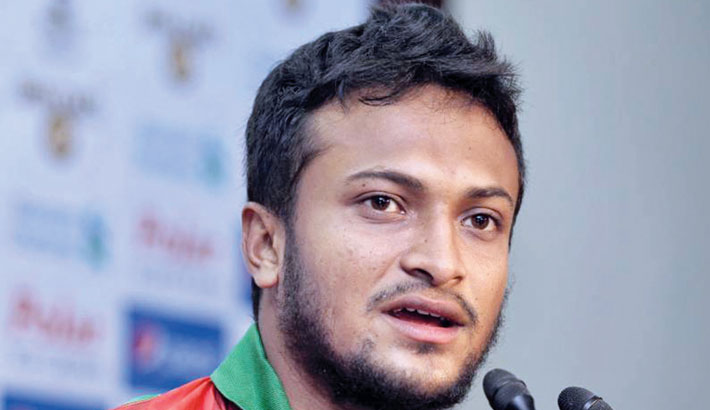 Bangladesh captain Shakib Al Hasan believes that they gifted the game to Afghanistan as they failed to hold on to the momentum and put pressure on their opponent in their second T20I of Tri-nation Series at Sher-e-Bangla National Cricket Stadium in the capital on Sunday.

There was no Afif Hossain heroics this time as Bangladesh paid the price of mindless batting, shoddy fielding to taste a 25-run defeat to Afghanistan in their second match of the Tri-nation T20 series.

Bangladesh bowled comparatively well but the ground fielding was not electrifying enough to stall a ruthless Afghan batting line up. Led by Mohammad Nabi’s swashbuckling unbeaten 54 ball-84 runs, Afghanistan raked up 164 runs for 6 wickets from a tittering 40 runs for 4 wickets.

The Afghan bowlers then complimented Nabi’s effort with a disciplined bowling and astonishing fielding performance to wrap up Bangladesh’s innings for 139 runs in 19.5 overs.

“We always knew that we lag behind them in terms of power but it was frustrating that we were not able to pick up wickets and they scored 106 runs in the last 10 overs. They should get credit for the way they handled the pressure and at the same time we also made mistakes as we were controlling the game until then,” told Shakib.

“But I think it was that no-ball (by Taijul Islam that negated the dismissal of Asghar Afghan) that hurt us a lot as we conceded 15-16 extra runs. We need to improve in these areas. I still don’t think we are far behind, although a 25-run loss in T20 is considered to be a big margin. Even if they batted very well, they should not have scored more than 135 runs. We were unable to pick wickets at the end (after Asghar was dismissed). We gave them that opportunity to make a comeback into the game,” he said.

Shakib added that Afghanistan is better than them in the shortest format and it was proven yet again that Afghanistan are a better side than Bangladesh when it comes to boom-boom cricket, although Rashid Khan’s side also registered a thumping 224-run Test win over Bangladesh earlier this month and Shakib did not hesitate to accept the reality.

“Obviously, they are a better team as they are ranked seven and we are at tenth spot. West Indies and Sri Lanka are above us, against whom we win and lose sometimes. As they are ranked seven, we actually find it difficult to win against them, which was the case in Dehradun (last year when they lost the series 3-0) and it also proved to be same today (Sunday). At the same time, I think we also gifted them the game as I think we were in a position from where we could have grabbed the opportunity with both hands,” he said.

Shakib added that they are paying the price of not playing as a unit while added that lack of confidence and a poor mindset were the biggest reasons for Bangladesh playing below-par cricket since ICC World Cup 2019.

“Probably we are lacking in confidence and when it happens you are not in the right mind to think,” he said.

“You have to bat, bowl and field well. In these three areas, you need to have your own game plan. How you attain success is up to you,” he said.

“I do not know how one can help other in that front. Coaching staff is always trying hard to motivate, telling us what the options in crisis situations are. But at the end of the day, you have to perform by yourself,” he said.

Shakib defended the promotion of Mushfiqur Rahim at the top.

“We have taken this decision after consulting with everybody in the team. The main reason was that those of us who are more experienced should bat at the top of the order so that they will get more opportunity and take control of the game. We are also not getting good starts. If experienced players shouldered more responsibility to score runs, it would have been good for the team,” he said adding that they are not playing as a team.

“Every match one or two players are performing while the rest are simply failing the team,” said Shakib.

“In any (successful) side most of the players perform and one or two fails,” he said.

“At the end of the day it is a team sport and we are not playing as a team and that is why winning is becoming so difficult for us,” he said.

Shakib added that they are still eyeing to play the final.

“We still have two matches. We think Zimbabwe has lost two matches playing two matches and so it will be difficult for them,” he said.

“I am pretty confident that our team has the ability to play in the final,” he concluded.