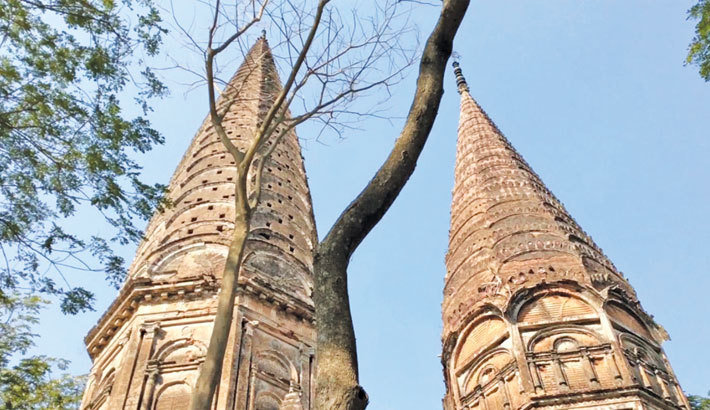 Sonarong Jora Moth (Golden Twin Temple) is the oldest and most beautiful ashram of Munshiganj. It is situated at a village called Sonarong, meaning golden colour, at Tongipara upazila of Munshiganj district. It is undoubtedly among the best tourist spots in Munshiganj district for its archaeological remains.

The temple is named Jora (Twin) because it has two shrines/towers side by side. The entire temple is 150 feet high. The shrine at the west is taller than the one at the east for about 15 meter, measuring 5.35m x 5.35m and has a 1.90 meter wide veranda.

Both the shrines stand on stonework surrounded by a moat on three sides having a path on the east which is the only way to access the temple. There are magnificent religious inscriptions over the temple's entryway. The moat is filled with water; hence it makes up for a huge pond, which makes the holy place even more tranquil.

It is said that the larger shrine among the twin temple was made for Shiva, the Hindu God, during 1843 and the smaller one was for Kali, the Hindu Goddess, made during 1886. A Hindu merchant named Rupchand built the temple.

Large trees cover the temple from all sides making an alluring blend of green and gold.

A low hemispherical dome covers the square sanctuary, over which rises an octagonal sikhara crowned by the usual pinnacle with kalasa finials. This terminates in a trident fixed with an iron rod.

The outer surface of the sikhara is decorated with a semi-circular arched pattern in plaster, which is repeated on all sides. The entire sikhara is dotted with three pigeonholes under each arch pattern. Visitors get to enjoy a lovely view of pigeons coming in and out of the tower. And the sweet sound of they make only adds to the serenity.

The main sanctuary has two archways, one in the south and the other one in the west, flanked by arched panels on both sides and a pattern of three arches on the other two sides.

The western entrance consists of a two-centered arch. The top of the archway is decorated with a frieze of blind merlons. In front of the sanctum, the veranda is covered with a flat roof supported by columns. It has three arched openings one in the south, another in the east and the last in the west.

This vital historical and archaeological place in Munshiganj is under renovation which is undoubtedly a great initiative to protect and preserve the divine monastery.

Visitors have to take a leguna or auto-rickshaw from Muktarpur Bridge of Tongipara upazila and head towards Tongibari Bus Stop. It is a 30-40 minutes long journey. From the bus stop, one can take another rickshaw or auto-rickshaw and head to the temple in 5 minutes.