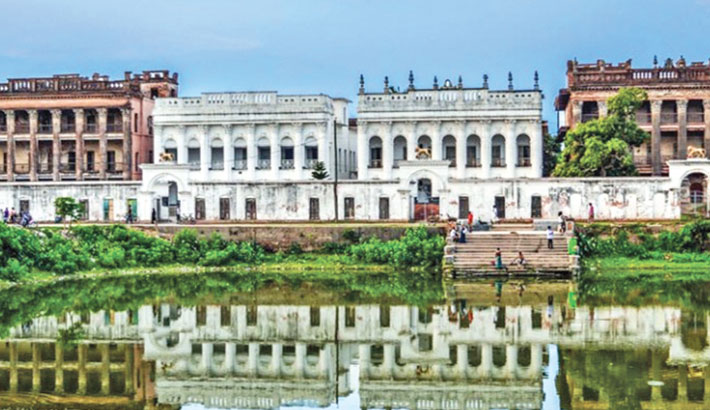 The historical Balihati Palace - a stunning national heritage of Bangladesh is located at Balihati village of Saturia Upazila under Manikganj district, just 40 km away from Dhaka. It takes just one and a half-an-hour journey from Dhaka to reach. The 200-years old palace is spread out amidst lush and extensive premises on the area of approximately 16000 square metre or 20 acres. Earlier a river named Gazikhali flowed by at the northern side of the palace. The river died in the course of time. 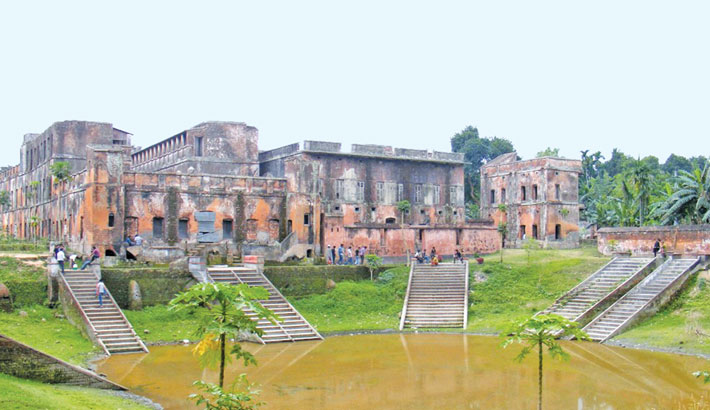 The spectacular Palace unfolds many striking histories and legends. The Palace stands southern faces with 200 rooms inside the premises and having a nice decorated pond backside. Each of the 200 rooms is of various crafted designs, shapes and structures and enclosed by a huge wall with identical gateways with lion sculptures surmounted on each of them. There are four Ghats (landing) to the ponds from the Palace. Other side of the pond, there are some sanitary lavatory. The south facade of the grand palace presents an attractive frontage of about 400 feet divided into four blocks. The two central blocks are two-storied and the other two terminal ones are three-storied.

The Balihati Zamindar Bari is considered to be one of the greatest specimens of 19th century renaissance style monuments in Bengal. According to B.C. Allen, in the district gazetteer of Dhaka, the house stands as an imposing masonry mass above the level plain, resembles very much of a Georgian Country House in England.

Gobinda Ram Saha, who was a renowned salt merchant in the 18th century, originally founded the palace. His ancestors were very poor and had small businesses. He became an heir, flourished as a businessman and extended it to establish the Zamindari. Later his four sons, Dadhi Ram, Ananda Ram, Pandit Ram and Gopal Ram built many monuments and structures of colonial style in the palace complex. Interestingly, the palace was formerly known as ‘Dosh-ani-Zamindar Bari’.

This extravagant archaeological site has a touch of Greco-Roman style roofs and pillars, having a complete aura of the antiquity. Each of the buildings was built in different period by individual member from the landlord’s family but together they remain as one grand edifice. The Balihati Zamindarbari originally consisted of five similar but separate blocks. The south facade of grand palace presents an attractive frontage of about 400 feet of the extant four blocks of the palace, the two central blocks are two-storied and the other two terminal ones are three-storied. The lofty encircling walls of the imposing Zamindarbari complex are punctuated by three superb gateways, identical in their architectural features.

Sri Gobinda Ram Saha - a Hindu rich salt merchant started founding this palace upon he got the feudal lordship over a vast, fertile area of Manikganj during the first half of the 18th century. His ancestors were poor who had small business. He became an heir to this small business and extended it to establish Zamindari (feudal lord). The marvelous blocked Palace was later erected and expanded by his successors. The zamindars of Balihati were renowned for their contribution in spreading education in this part of Bengal. Kishori Rai Chowdhury, one of the zamindars of Balihati established Jagannath College (now Jagannath University) and K. L. Jubily High School in Dhaka, which he named after his father. He also established many schools and charitable clinics in Manikganj district.  Ishwarchandra High School at Balihati is prominent one among the all others.

This outstanding complex - Balihati Zamindarbari has been acquired by the Department of Archaeology (DoA), Bangladesh with a new given name ‘Balihati Palace’ as a protected cultural property in 1987. There was a bright and decorated room in the upper storey of the palace called Rong Mahal (Entertainment room) which has now been transformed into a museum so that the tourists can get an insight and know about its history. Bangladesh Tourism Corporation conducts package tours to this Palace and other nearby sites.

The writer is a tourism expert.